The Dartmouth coach talks to his team about the on-field collapse of the NFL safety. 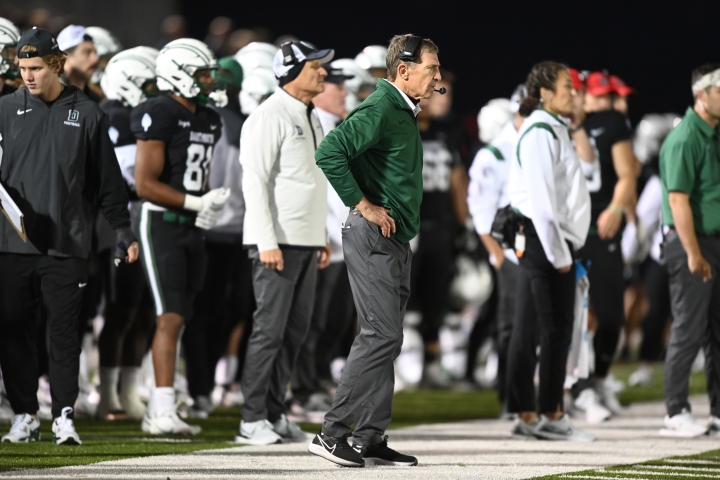 Head Football Coach Buddy Teevens ’79 , who has been widely recognized for his efforts to make football and tackling safer, says he was impressed by the NFL’s emergency response after Buffalo Bills safety Damar Hamlin went into cardiac arrest and collapsed during a nationally televised game Monday night in Cincinnati.

“The play and the resulting injury appeared to be the ‘perfect storm’ of extremely unlikely occurrences. It was a regular football play. The contact wasn’t anything excessive or egregious; it was the type that occurs dozens of times during games,” says Teevens, the Robert L. Blackman Head Football Coach.

Hamlin received CPR on the field and his heartbeat was restored before he was taken to the University of Cincinnati Medical Center. He remained in critical condition on Wednesday.

“As a coach, I appreciated how quickly the NFL emergency medical staff responded. Their actions probably saved his life,” says Teevens, who spoke to his own team Tuesday night about what happened and the inherent risks in the game. Teevens says the incident was on all of the players’ minds and talking it through was “cathartic.”

Dartmouth has extensive health and safety measures on hand at football games, including an automated external defibrillator, spine-boarding equipment, and tools that can help rapidly remove a player’s helmet, shoulder pads, and other equipment in case of an injury.

At least two certified athletic trainers are on-site for all football games, and a team doctor, typically an orthopedic surgeon, is also on hand. An ambulance crew from the Hanover Fire Department is also at games, and Dartmouth’s sports medicine staff conducts annual training in emergency procedures. Emergency action plans are also in place.

Teevens has won national attention for his use of the Mobile Virtual Player, a remote-controlled tackling dummy that helps eliminate live tackling and reduce injuries during Dartmouth football practices.

Several NFL teams have also used the MVP, which was developed by engineers at Thayer School of Engineering.

Teevens says he is encouraged by the support Hamlin and his family have received from across the sport of football, and from the entire country.

“It has been wonderful to see the outpouring of concern, love, and support for Damar and his family from across the country. The humanity sports can engender appears to be drawing all of us together,” Teevens says.