Exhibition: Will Carter and the Dartmouth Typeface

In the early 1960s, Will Carter of Cambridge, England, was commissioned to carve a series of dedicatory inscriptions in teak panels for the newly built Hopkins Center. Those letters were adapted and expanded into a family of type fonts that became known as the Dartmouth typeface. Carter was invited to return to Dartmouth in 1969 as an artist-in-residence and further refined the capital letters as a titling font. This exhibition is the chonology of events and the story of the people behind those events. 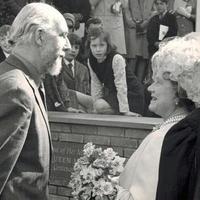