Cathy Melocik, associate director of publications in Creative Services at the Tuck School of Business, recently won two episodes on the television game show Jeopardy! Melocik’s streak ended when she lost her lead in the Final Jeopardy! round of her third appearance. 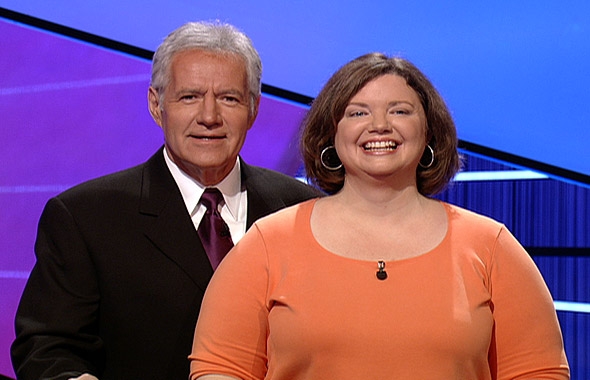 Caption: Cathy Melocik, associate director of publications in Tuck Creative Services, with Jeopardy! host Alex Trebek. Melocik was a contestant in May and June, winning two episodes and appearing in a third. (courtesy Sony Pictures Entertainment)

Melocik, of Wilder, Vt., described the experience as overwhelmingly positive: “I went out there with a lot of support from family and friends at home and at Tuck too. The crew are all enthusiastic and really prepare you well for the show.”

An avid viewer, Melocik had taken an online Jeopardy! test in 2008 “just for fun,” and then was invited a few months later to an in-person audition in Boston. In January 2010 she received a call from a show staffer who invited her to Los Angeles to tape the show during early February. She taped her episodes over two days at the Culver City Sony Studios. The episodes aired on NBC and its affiliates on May 31, June 1, and June 2, 2010.

Since the show, she often gets asked what host Alex Trebek is like. “He’s just like he is on the show!” she says. “He’s super-smart, very professional, and very funny—he has a very dry wit.” Trebek takes questions from the audience during breaks in taping, she recounts, noting that the contestants brushed up on Canadian trivia, knowing his Canadian roots.

“I played against some fabulous contestants—all great, really smart players who were also big fun,” she says. “I had the best time. I’d do it again a second.”

Think you could be a Jeopardy! contender? Test your knowledge against the Final Jeopardy! clues for the three episodes in which Melocik appeared (answers are below):

Final Jeopardy! May 31 Category: ENGLISH POETS Clue: Translator Edward Fitzgerald wrote that her 1861 “death is rather a relief to me ... no more Aurora Leighs, thank God”

Final Jeopardy! June 2 Category: HISTORICAL PHRASES Clue: Before it meant a space between opposing armies, it referred to an execution site outside the walls of London

May 31–Who is Elizabeth (Barrett) Browning?

June 1–What is the Army Corps of Engineers?

Written by
Jocelyn Krauss
Share this
FacebookTwitterEmail
In the News