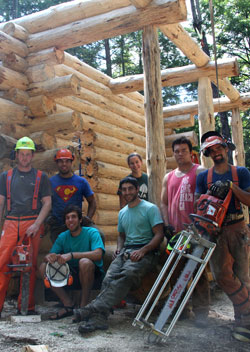 A Dartmouth Outing Club (DOC) six-person crew of students and recent graduates spent the summer of 2010 rebuilding Titcomb Cabin, located on the Connecticut River’s Gilman Island about a mile downriver from campus. The original cabin, which was built in 1952, burned down in a May 2009 fire.

The crew, who are all members of DOC’s Ledyard Canoe Club, floated nearly all the construction materials—including a large toolbox, a cement mixer, a wheelbarrow, and 52 80-pound bags of concrete—to the island via canoes and non-motorized boats.

The crew tracked their progress over the summer with hundreds of photos, time-lapse videos, and journal-style entries on their entertaining blog, Rebuilding Titcomb Cabin.

At the end of August, as the crew ended their summer session of work, the cabin stood 14 logs high and had a nearly completed roof, porch, and windows. The cabin was built on the footprint of the former cabin, which was named after John Abbott Titcomb ’32, himself an active cabin builder for the DOC in the 1930s. 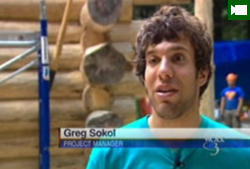 “We’re proud that our work will be a part of Ledyard history,” says project leader Greg Sokol, a 2010 Dartmouth graduate from Irvington, N.Y., and now a fifth-year student at Thayer School of Engineering. “It’s been hard work, but we’ve put a lot of ourselves into the project and made it our own in many ways.”

In late fall 2009, students helped select the 97 red pine and spruce logs which were harvested from a College-owned woodlot in Corinth, Vt. The logs were trucked to the Organic Farm where they were peeled this spring. Then in an event that hearkened back to the old log drives on the Connecticut River, the logs were grouped into batches of 8-10 and floated down to the island. They were guided by a boat steered by Lauren “Duffy” Cummings ’72 of Dartmouth’s Safety and Security office. 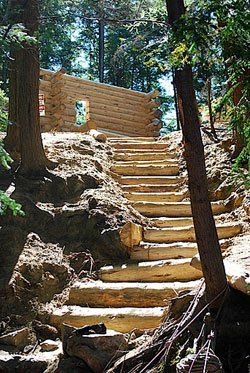 Detail of the log staircase leading to the cabin (photo by Kate Bowman ’10).

Director of Outdoor Programs Dan Nelson ’75 says, “I think the learning and fellowship that has been part of this project is as important as the cabin itself. The cabin is a work of art, and the students who built it were extraordinarily conscientious, creative, capable, and hard-working.”

Sokol and others will continue to work on the cabin periodically through the fall. It will reopen to the public in spring 2011.