Slovenian Swimmer is Making a Big Splash for the Big Green

Update: Nejc Zupan won the 1,000 and 1,650 freestyle at the Ivy League Championships from March 3-5, 2011, becoming the first Big Green swimmer in history to win these events at the championship. His times of 9:03.37 and 15:14.83, respectively, shattered two Dartmouth records. Zupan’s performance led the team to a 7th place finish, ahead of Brown.

First-year student Nejc Zupan is the Slovenian national men’s champion in distance freestyle and a potential 2012 Olympian. More importantly for the Dartmouth swimming and diving team, he’s one of the Ivy League’s top three swimmers and the best swimmer the Big Green has had in years, according to Jim Wilson, head coach of the Dartmouth men’s and women’s swim teams. 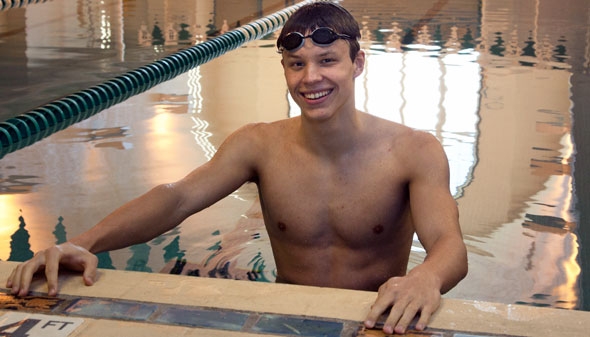 Nejc Zupan ’14, Dartmouth’s top swimmer and only student from Slovenia, is a 2012 Olympic hopeful. (photo by Joseph Mehling ’69)

Zupan, whose strength is in distance events such as the 500, 1000, and the 1650-yard freestyle, lost only one individual race during the regular season, falling to Yale in the 1000 in mid-January. “He’ll probably set three school records this year,” says Wilson. “Kevin Ellis ’09 was our premier distance swimmer prior to this, and he was a finalist at the Ivy League Championships. But already Nejc is well ahead of that. So we’ll just have to wait and see where it all plays out.”

So far Zupan couldn’t be happier. He wasn’t sure what to expect, having never visited Hanover before arriving on campus for his Dartmouth Outing Club First-Year Trip in September. But he liked what he had read online about the College’s strength in economics and engineering, two of his academic areas of interest.

“The comments about Dartmouth on the online college forums were really good,” says Zupan, who attended an academically rigorous international school in Ljubljana, Slovenia’s capitol. “For example, they were all saying that it’s a small campus, tight community, strong alumni network, a lot of support for the students, and focus on undergraduates. All these things convinced me to come here because I felt like it’s going to be a college that fits me. And it has been so far.”

His Internet research also indicated that the Big Green’s swim program is on the rise. “What I saw was that each class was getting stronger, so that was a really good sign,” says Zupan, who switched his focus from skiing to swimming at age nine. “And then I talked to the coaches and they assured me that swimming here is improving, and they’re trying hard to build a strong team. I didn’t have any concern. I knew I wanted to swim here. And I think we might have a chance to turn this trend around and not be last in the Ivies. We won against an Ivy League rival, Brown, for the first time in seven years, so that’s a good sign. We’re hoping to keep that up and beat them again at the Ivy League Championships in March.”

For Wilson, having a swimmer of Zupan’s caliber not only helps with overall scoring in meets, but also helps motivate the team. “The intensity that he brings to the workout every day has really raised the bar,” says Wilson. “And being able to do the things he does, other swimmers on the team are starting to step up and realize they can do it, too. It just raises everybody’s level and ability.”

Zupan is the only Slovenian student at Dartmouth (his faculty advisor is Dartmouth’s lone Slovenian professor, Nina Pavcnik of the economics department), but any homesickness is kept at bay by the swim team’s strong camaraderie. “It’s like a big family. We Blitz each other for lunch, for study sessions, and we help each other,” says Zupan, who in winter term is continuing with the writing class he started in the fall, but replacing math and physics with Russian 10 and Econ 1. “I would say we are surprisingly tight with each other as compared to other schools, and all the recruits that visited say that they observe the same thing. Team spirit really matters here, and I think we’re doing it well.”