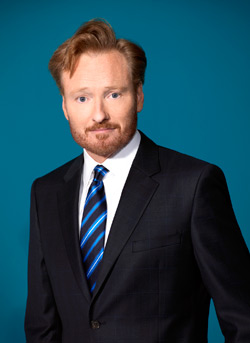 With “a comic identity as distinctive as his name,” according to The New York Times, Conan O’Brien has firmly established himself in the late night comedy universe. Hailed by The Washington Post as “modest, wry, self-effacing, and demonstrably the most intelligent of the late-night comics,” O’Brien’s unique brand of comedy has earned him the title “Late Night’s King of Cool” from Entertainment Weekly.

A Harvard graduate and two-time president of the venerable and notorious Harvard Lampoon, O’Brien moved to Los Angeles following graduation and joined the writing staff of HBO’s Not Necessarily the News. During his two years with the show, he performed regularly with several improvisational groups, including The Groundlings.

By 1988, his talents had come to the attention of Lorne Michaels, executive producer of Saturday Night Life, who hired O’Brien as a writer in January of that year. His three-and-a-half years on the show produced such reoccurring sketches as “Mr. Short-Term Memory” and “The Girl Watchers.” In 1989, his work on SNL was recognized with an Emmy Award for Outstanding Writing in a Comedy or Variety Series.

In the spring of 1991, O’Brien left SNL. He then signed on as a writer/producer for the Fox series, The Simpsons, and later became the show’s supervising producer. Of all the episodes he wrote, his favorite is “Springfield Gets a Monorail.”

On April 26, 1993, Michaels selected O’Brien to succeed David Letterman as the new host of Late Night on NBC. According to Michaels, O’Brien was selected from among the many talented potential hosts for his unique mix of “vitality, wit, and intelligence.”

For almost 16 years, O’Brien combined his talents as a writer, performer, and interviewer as host of Late Night. During his years on the show, he and his team were consistently honored with Emmy nominations for Outstanding Comedy-Variety Series and, in 2007, the Late Night writing team won its first Emmy for Outstanding Writing in a Comedy or Variety Series after 10 years of nominations. O’Brien and the Late Night writing staff also won six Writer’s Guild Awards for Best Writing in a Comedy/Variety Series, including two consecutive wins in 2002 and 2003 and 12 nominations overall.

In May 2008, it was announced that O’Brien was going to hand the reins of Late Night over to Jimmy Fallon. O’Brien would take over hosting duties for The Tonight Show from Jay Leno, a deal NBC had worked out with O’Brien in 2004. On June 1, 2009, Will Ferrell was O’Brien’s first guest on the couch and Pearl Jam was the first musical guest. O’Brien’s final appearance on The Tonight Show was on January 22, 2010.

On April 12, 2010, he hit the road, launching his aptly titled comedy road show, the “Legally Prohibited from Being Funny on Television Tour.” The two-month, 30-city tour sold out in nearly every location. Also on April 12, O’Brien announced via Twitter that he had agreed with the cable network TBS to launch a new talk show. The show, titled Conan, premiered November 8, 2010, and is on weeknights at 11 p.m.

Born in Brookline, Mass., O’Brien is married and has two children and currently resides in Los Angeles.