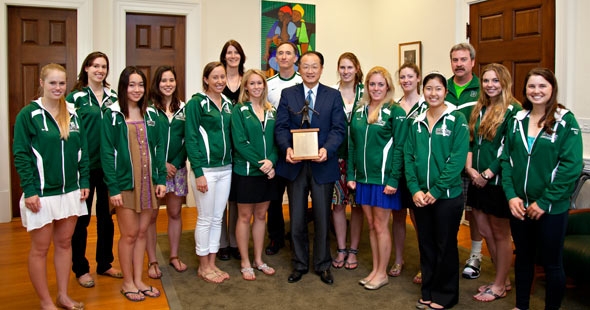 For Molly Scott ’11, this year has been one for the record books. The southern Californian helped lead the women’s tennis team to the program’s first-ever Ivy League title in April. Scott was also selected to the All-Ivy first team in singles for the third time, one of only 12 players in Ivy League history to be named three times to the singles first team, and set a school record for most career wins. Remarkably, all of the senior tri-captain’s 165 wins, except for one doubles match, were attained while playing the number one spot in singles and doubles. Additionally, Scott, in mid-May, was named the Intercollegiate Tennis Association’s (ITA) Northeast Region Senior of the Year and earned the region’s Cissie Leary Award for Sportsmanship.

“After winning Dartmouth’s first-ever Ivy League women’s tennis title,” says Scott, “the team and I felt an obvious sense of pride and accomplishment.” And the timing, the history major points out, is particularly sweet: “I’m grateful that we were able to claim the Ivy title for head coach Bob Dallis, but we’re also thrilled that we won the title this year, the 50th reunion year for Ron Boss ’61, Tuck ’62. He and his family have been such incredible supporters of the Dartmouth tennis programs, with the donation of the Alexis Boss Tennis Center, and it means a lot to me and to the other senior captains [Georgiana Smyser ’11 and Ryan Reichel ’11] that we will get to celebrate this championship with him at commencement,” when Boss will receive an honorary degree. 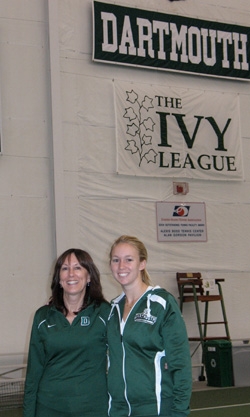 Molly Scott ’11 with her mother, Cindy Wolcott ’76, during parents’ weekend in April at the Alexis Boss Tennis Center and Alan Gordon Pavilion. (photo by Bonnie Barber)

Scott’s Big Green career was capped at the Athletic Department’s Celebration of Athletic Excellence event, on May 23, when she was presented with the Class of 1976 Award. The award is given to the most outstanding woman athlete as voted by the head coaches of all Dartmouth women’s varsity teams. Scott was thrilled to win the award, but it also had great significance for her mother, Cindy Wolcott ’76.

Wolcott, who is married to attorney Jim Scott ’69, got the news at home in Coto de Caza, Calif. “I was beaming with pride,” she says, having watched her daughter make Dartmouth athletics history throughout this year. “But I also thought about how ironic it was, that I would be in the first class of women and 35 years later my daughter would win the Class of 1976 award. The closest I got to being involved in athletics was as a member of the Dartmouth College Marching Band when we appeared on the football field during half-time!”

The pioneering Class of 1976 celebrates its 35th reunion from June 16 through 19, on the heels of Scott’s graduation, on June 12. Like many of her female classmates whose children have matriculated at Dartmouth, Wolcott has gotten to see firsthand the positive changes Dartmouth has undergone since the early days of coeducation.

When Wolcott graduated from Stevens High School in Claremont, N.H., and entered Dartmouth in the fall of 1972, it didn’t really register that she was making history as one of the 177 female members in the College’s first four-year class of women. She was too busy dealing with the fallout of coeducation. “You had a very vocal minority who made it very clear that they didn’t want women on campus,” recalls Wolcott, who was the first person in her family to go to college. “Today that type of hostility would never be accepted or condoned.

”But things have really changed,“ continues Wolcott, who is a partner in the law firm of Palmieri, Tyler, Wiener, Wilhelm & Waldron in Irvine, Calif.  ”I think that my allegiance to Dartmouth is much more solid and enduring now because of my daughter attending the College. Dartmouth gave her an outstanding academic experience and allowed her to shine in athletics. I’ll never forget this whole year. It was remarkable.“

Scott, who was offered a scholarship by perennial national champion Stanford and was also recruited out of high school by Harvard and Princeton, plans to play pro tennis for a few years after graduation, and then attend law school. ”I’ve had a wonderful time at Dartmouth,“ she says. ”The support the team and I have received from members of earlier teams, as well as the larger Dartmouth community, has been overwhelming. It’s going to be difficult to say goodbye to everyone on Sunday."