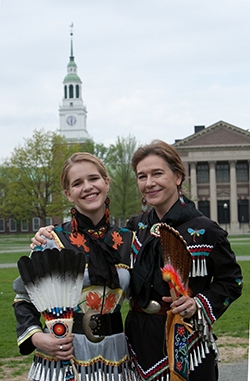 Chosen from a field of high-profile nominees, Louise Erdrich ’76 won the 2012 National Book Award for fiction for her novel The Round House. She received the award Wednesday, November 14, at a ceremony in New York City.

Also in attendance was Dartmouth Professor Cynthia Huntington, a finalist in the poetry category. Huntington was nominated for Heavenly Bodies, her fourth book of poetry. She has also published a book of prose, The Salt House. New Hampshire’s Poet Laureate in 2004 and 2005, Huntington has taught at Dartmouth since 1988. 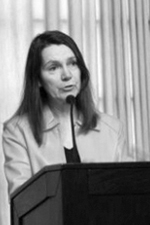 Poet and English Professor Cynthia Huntington was a finalist in the poetry category. (Photo by Richard Stamelman.)

Erdrich graduated in 1976, as a member of Dartmouth’s first coeducational class, and has been a Montgomery Fellow three times—in 1992, 2011, and 2012. She received an honorary degree from Dartmouth in 2009 and delivered the 2009 Commencement address. Her daughter Aza Erdrich Dorris is a member of the Class of 2011.

The author of 14 novels, Erdrich has also published poetry, essays, short stories, a memoir, and children’s books. Among her highly acclaimed novels are Love Medicine (1984), which won the National Book Critics Circle Award; and The Plague of Doves (2009), which was a finalist for the Pulitzer Prize.

In her acceptance speech Wednesday, Erdrich began by speaking in her Native American language in recognition of Native people watching, before switching to English.

Some Past Nominees And Winners From Dartmouth

“I’d like to, in the end, accept this in the spirit of the Turtle Mountain Chippewa people and in recognition of the grace and the endurance of Native women,” said Erdrich. “This is a book about a huge case of injustice ongoing on reservations, and thank you for giving it a wider audience. It means so much to all of us.”

The Round House, published by Harper, an imprint of HarperCollins, is set in the spring of 1988 on a reservation in North Dakota, and follows the 13-year-old Joe Coutts, who seeks justice for his mother after she is viciously attacked.

“Once I discovered (Joe Coutts’) voice, I was hooked into his world,” Erdrich said after giving a reading on campus this year. “There’s things about him that are so affecting to me because he started being someone that I didn’t really think I’d come to know.

“This novel is about, in broad terms, an issue that is extremely timely—but it’s been timely for a long time—it’s about the rape and abuse of women in Indian country and the difficulty that there is in prosecuting these cases,” she said. “The situation there is absolutely abysmal for women.”

In a story published Wednesday, The New York Times described the competition for the fiction award as “particularly tight this year.” 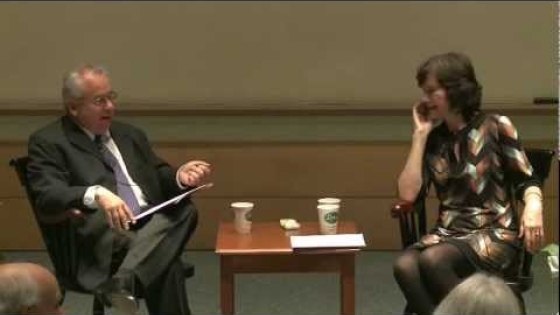