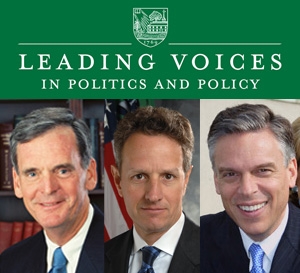 The series, which will bring national political and policy experts and presidential candidates to Dartmouth, is sponsored by the Office of the President and Nelson A. Rockefeller Center for Public Policy and the Social Sciences at Dartmouth College.

More information, including additional speakers, will be published on the lecture series website as details become available. Watch the site for the most current dates, times, and locations for the lectures, all of which are free and open to the public. Seating will be on a first-come, first-served basis.

The following speakers are confirmed:

Featured this week will be:

Also this week, another lecturer has been added to the roster. Presidential candidate Jon Huntsman Jr., will come to Dartmouth next month. (See complete list of confirmed lecturers at right.) Dartmouth expects to announce other lecturers in the coming weeks. See lecture website for up-to-date details.

Huntsman, a former Utah governor and former U.S. Ambassador to China, announced his intention to run for the presidency on June 21.

The lectures, which run through mid-August, are integrated with a new team-taught summer term course called “Contemporary Issues in American Politics and Public Policy,” sponsored by Nelson A. Rockefeller Center for Public Policy and the Social Sciences at Dartmouth College.

“The lectures are an opportunity for students and members of the larger community to share a common intellectual experience,” said President Jim Yong Kim, who is also a public health physician and will speak to the class on current challenges in health care. “This course is another way Dartmouth is engaging students in the complexities of the world and bringing a diversity of perspectives to the campus.”

The team-taught course will be led by visiting Professor Charles Wheelan ’88, of the Harris School at the University of Chicago. Wheelan, a former member of the Board of Visitors at the Rockefeller Center, has returned to his alma mater each year since 2006 to teach summer courses in economics and public policy.