Words of Wisdom for MBA Grads at Investiture Ceremony 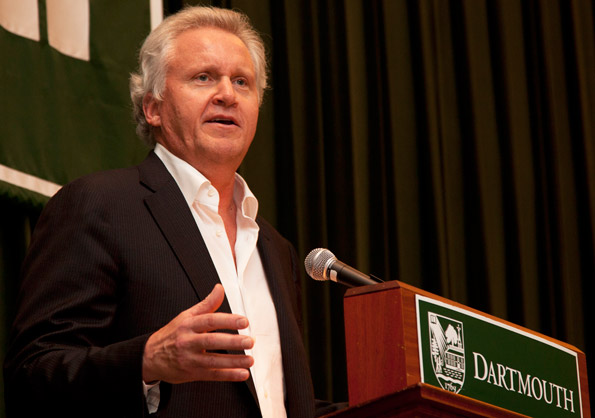 Jeff Immelt graduated from Dartmouth with a degree in applied mathematics in 1978. He’s been GE president and chairman since 2000. (photo by Joseph Mehling ’69)

In a packed Leede Arena at the Tuck Investiture Ceremony, Immelt told the MBA candidates to think globally, have the courage to make difficult decisions, be problem solvers, connect with people, and understand context.

Tuck will graduate 254 MBA students on Sunday, June 12, 2011. At the Investiture, they received the academic hoods they will wear at Commencement. Tuck Dean Paul Danos wished the students well, encouraging them to “exercise your leadership with grace.”

For the ceremony’s keynote speech, Immelt, a member of Dartmouth’s Board of Trustees, says he decided to speak in concrete terms, in contrast to the more philosophical speech he gave at Dartmouth’s 2004 Commencement. “You’re up to eyeballs in debt and you’re looking for work, so I thought I’d speak more directly to you,” he says.

As more than 1,600 family and friends watched, Immelt advised students to embrace globalization, despite the fact that those around them may not.

“Every one of you is going to be a global thinker in the future,” he says. “And one thing you all have in common, no matter where you came from, is that you’re the only ones that are going to like globalization. The people in your communities don’t. Your parents don’t. You can’t be afraid of it. You have to embrace it, you have to accept it. You have to lead from a global framework.”

Before he arrived at Dartmouth as an undergraduate, Immelt had never been more than 100 miles from his Ohio hometown. Today’s young business leaders must travel far from home, he says, cautioning them to be humble in far-away places. ”You can’t have any arrogance in order to learn.“

Another change from his early years in business, says Immelt, is that for young executives, decisions must be made quickly. ”You could go five years in the 90s without have to make a really tough decision. You can’t go five minutes today without making really tough calls.“

Many of the world’s biggest crises have happened on Immelt’s watch at GE, and touched sectors of his business. He was there through 9/11, having the world’s biggest airplane fleet; through Hurricane Katrina, having one of the biggest insurance companies in the world; through the Lehman Brothers bankruptcy, having one of the biggest financial service companies in the world; through the BP oil spill, having a large oil and gas business; and through the Japan earthquake, having nuclear power business in GE’s portfolio.

They point up ”the amount of adaptability you have to have to be a winner and survivor in the business world today,“ he says. ”Make decisions. Don’t fear. Your MBA gives you the right and gives you the strength to make decisions.“

Immelt urged students to learn to be good at solving problems, and to ask for the toughest assignments. He said too often people look for work in areas of business that are doing well.

”It’s really the bad businesses that are going to make you a good leader, and that’s where you have to be willing to go,“ he advises. ”Learn how to be the person who takes on the toughest challenges. That’s how you get ahead.“

And to be a good leader, ”you have to like people,“ Immelt says. He said Dartmouth teaches students ”how to build connections with people. And that’s the foundation on which great leaders are built.“

It’s also important to understand context around business, he says. ”How does any of the work you do fit into a larger context?“

Lastly, Immelt told students they have an important role in a competitive society. ”The future’s going to be created by persistent, tough-minded optimists, like the ones I hope we have in this room."