Former New Mexico Governor Gary Johnson spoke with Dartmouth students on July 22 about his run for the presidency. (courtesy of Gary Johnson)

Presidential candidate Gary Johnson, the former governor of New Mexico, spoke to Dartmouth students in two classes as part of the “Leading Voices in Politics and Policy” series.

“Within just the span of about a week and a half, we’ve had former New York City Mayor Rudy Giuliani speak to several public policy and government classes, former Governor Buddy Roemer announce that he is running for president right in the Hanover Inn and speak to students and the community afterwards, Governor Gary Johnson speak to my government classes about the process of running for president, and Ambassador Jon Huntsman, also a candidate, will be speaking at Dartmouth next week,” she said.

Johnson, dressed in jeans, a polo shirt, and sneakers, talked to students about his beliefs, which include the legalization of marijuana, probably the position for which he is best known. And he told them about running a shoestring campaign and polling at the bottom of the pack—a position he remembered well from his first race for governor.

“This is the only vantage point I’ve ever known,” he said.

Johnson served as governor from 1994 to 2003, when term limits didn’t allow him to run again. He’s trying to make a stand in New Hampshire, the first-in-the-nation primary state, where he has been spending time, he told students.

“I think it’s really a great political environment in this state where everybody really does go out of their way to listen to what (candidates) are saying,” Johnson said.

The Dartmouth venue, he said in a brief interview after one of the classes, “is just another opportunity to be able to speak to 20 people.”

Some of the politicians and policy makers visiting Dartmouth this summer also deliver public lectures in the Leading Voices series, which is sponsored by the Office of the President and Nelson A. Rockefeller Center for Public Policy and the Social Sciences at Dartmouth College.

“This summer has been an amazing opportunity for Dartmouth students to really see New Hampshire retail politics in action. For students of government or public policy—or people interested in politics on a more casual basis—there is nothing quite like seeing candidates and potential candidates up close and in person,” Brooks said. 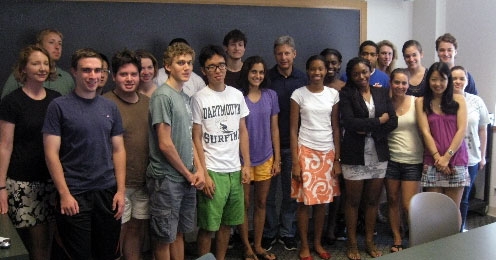 The next speaker will be Huntsman, a Republican presidential candidate, former Utah governor and former ambassador to China, on July 26, at noon in the Hopkins Center’s Moore Theater. Former New York City chancellor of schools Joel Klein will speak on July 28, also at noon. Klein, who in January became CEO of the Educational Division at News Corp., is now overseeing the company’s internal phone hacking investigation.

The lecture series will be followed this fall by a Republican presidential candidate debate, set for October 11, and hosted by Dartmouth, Bloomberg Television, The Washington Post, and WBIN-TV.