“Even before moderator Charlie Rose welcomed us to the debate, the opening visuals suggested the Dartmouth debate would be different,” says Josh Compton, lecturer in writing and rhetoric, of the unusual roundtable format.

The custom-built table the candidates gathered around was actually oval, thanks to a last-minute change. At a set walk-through the night before the debate, candidates’ representatives sat at the table and several didn’t like the close quarters of the seating arrangement. So, at 11:30 p.m. on October 10, crew members began dismantling the table and inserted a new 28-inch section, changing the round table into an oval design. 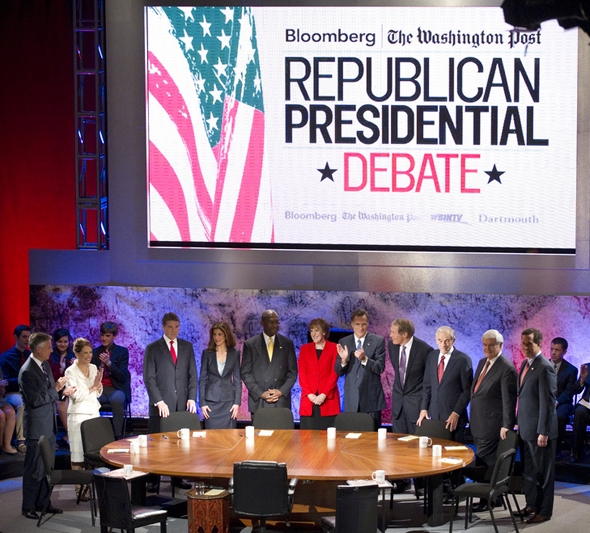 The table’s designer, Michael Hotopp, and creators at Cigar Box Studios Inc., in Newburgh, N.Y., anticipated this could happen and had included extra lumber and laminate that could be added on site. But the change wasn’t just a matter of enlarging the table.

The new dimensions also meant repositioning nine cameras, lighting, and sound equipment and enlarging the riser under the table. That, in turn, meant modifications to the on-stage and theater seating plans. Dozens of backstage workers—carpenters, electricians, camera, and sound crews—were at work making the adjustments until after 3 a.m. on the day of the debate.

“No presidential debate had ever been held at a round table before. The people at Bloomberg kept saying, ‘We’re either going to make history, or it’s going to be a disaster,’” recalls Keely Ayres, senior production manager at the Hopkins Center.

Theater Professor Dan Kotlowitz, an expert in set design and lighting, underscores the level of attention to detail required. “Lighting in the performing arts is used to support the narrative,” he says. “The debate lighting supported the narrative of an intimate dialogue by keeping the focus around the table, using a strong backlight to pull the candidates out from the background, and never letting the ‘look’ get too big or political.”

Compton adds that the scene was “reminiscent of a boardroom, or even a dining room, and this unique format may have led viewers to expect a more collaborative, more dialogic conversation than we often associate with political debates.”

According to National Public Radio’s next-day commentary, that’s just what happened. “By sitting everyone down, the sponsors managed to elevate the discussion,” said NPR. “The candidates had plenty of opportunity to badger and beard each other, but they did so in a more civil and substantive manner than in any debate to date.”