Among Dartmouth’s notable former summer Olympians are Dominic Seiterle ’98, who won a gold medal rowing for Canada at the 2008 Games in Beijing; Adam Nelson ’97, who won the silver medal in shot put at the 2000 and 2004 Games; and Carlie Geer ’80, the first Dartmouth woman to earn an Olympic medal, who took the silver in crew at the 1984 Games in Los Angeles.

As for the medal count, Dartmouth athletes have claimed 28 gold, 22 silver, and 13 bronze medals through 2010.

Unfortunately, the Olympic bids of Abbey D’Agostino ’14 and Ben True ’08 ended in the final heats of the 5,000-meter race at the U.S. Olympic Track and Field Trials in Eugene, Ore., on June 28, as D’Agostino finished fifth and True sixth.

D’Agostino, who was featured in a Runner’s World article the day before the final heat, set a personal record of 15:19.98 and met the Olympic “A” standard of 15:20.00 for the first time in her career. But in a tight sprint to the finish with two other runners, D’Agostino was edged at the wire. True finished with a time of 13:28.02, running in a record-setting heat as winner Galen Rupp broke the legendary Steve Prefontaine’s nearly 40-year-old Olympic Trials record with his time of 13:22.67. 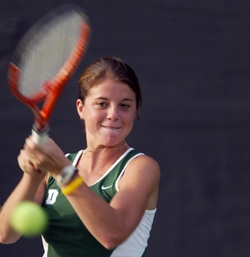 As an undergraduate, Olympic cyclist Evie Stevens ’05 played on the tennis team and was a government major and a women’s and gender studies minor. (photo courtesy of Dartmouth Athletics)

Among Dartmouth’s alumni Olympians, Stevens is a statistical outlier, having never competed in cycling until after college. A four-year member of the Dartmouth women’s tennis team, Stevens first came to national attention in the summer of 2009, when the Wall Street Journal wrote a feature story about how she had quit her job as a Wall Street associate to pursue a cycling career. Since then, the Acton, Mass., native has been profiled by numerous media outlets, including the Dartmouth Alumni Magazine, Outside magazine, and ESPN, en route to her rise to the top 10 of the World Cup cycling standings. 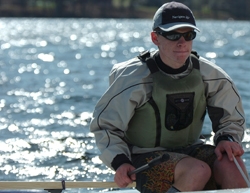 While at Dartmouth, Erick Storck ’07, was a four-time All-American and two-time finalist for College Sailor of the Year. (photo courtesy of Dartmouth Athletics)

Storck, a U.S. Sailing Team Sperry Top-Sider team member, qualified in the 49er sailing dinghy class with Trevor Moore of North Pomfret, Vt. A two-time finalist for College Sailor of the Year while a Dartmouth undergraduate, the economics major from Huntington, N.Y., will be competing in his first Olympic Games. Storck and Moore have known each other since they were 10, but as they recently told SailWorld.com, they were fierce college rivals (Moore sailed for Hobart and William Smith Colleges). 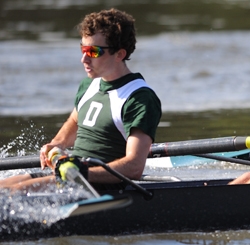 An art history major, Fahden has been a member of the U.S. National Rowing Team since 2008, and for the past year the Northern Californian has been living and training at U.S. Rowing’s National High Performance Center in Oklahoma City. He rows in a boat dubbed the “Ivy League 4” because his boatmates are Harvard, Columbia, and Princeton rowers. Fahden’s boat made the U.S. team after winning the 2012 Olympic Qualification Regatta in Switzerland in May. An Oklahoma television reporter recently interviewed Fahden and the other members of the Ivy League 4. 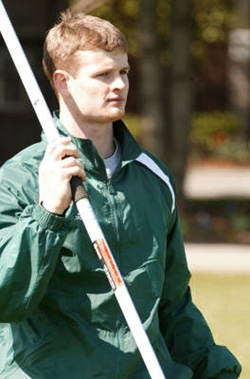 Sean Furey ’04, Thayer ’05 and ’06, finished fourth in the javelin at the U.S. Olympic Trials, earning him a spot on his first U.S. Olympic team. (photo courtesy of Dartmouth Athletics)

As Dartmouth Now noted earlier this week, javelin thrower Furey heads to the Olympics for the first time after finishing fourth at the U.S. Olympic Track and Field Trials on June 25. Although the San Diego-based engineer didn’t finish in the top three, Furey had met the Olympic “A” standard two-and-a-half weeks ago, unlike the top two finishers, with a throw of 271-5 feet and therefore locked up a spot on the Olympic team. A native of Methuen, Mass., Furey holds the Dartmouth record in the javelin. Also a former Dartmouth J.V. quarterback, he earned a 3.80 GPA as an engineering major and was named the 2005 U.S. Track & Field and Cross Country Coaches Association Men’s Scholar Athlete of the Year.