Ongoing Coverage: The Dartmouth Aires on The Sing-Off

Millions of viewers nationwide have discovered the talents of the Dartmouth Aires thanks to The Sing-Off, an all-vocal singing competition that has been airing on NBC this fall. When the show premiered on September 19, Dartmouth’s oldest a cappella group was one of 16 ensembles contending for the grand prize of $200,000 and a Sony Music recording contract. The Aires’ talent and commitment earned them second place in the competition, as announced in the show’s live finale on November 28. 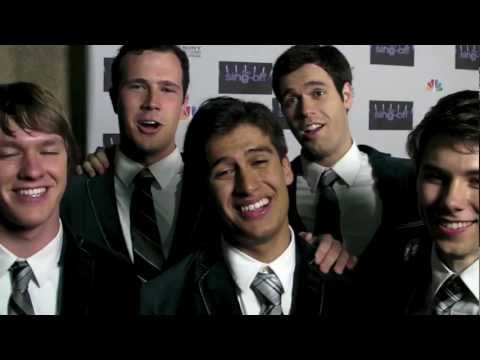 Thursday, December 1: In this video shot at the red-carpet event following Monday’s live show, the Aires thank their fans in Hanover and beyond and deliver a spontaneous performance of Dartmouth’s “Alma Mater” that brought the surrounding crowd of reporters to a standstill. From performing “Somewhere” as their swan song to Xavier Curry ’14s family reunion, read about more behind-the-scenes moments from the live finale in Los Angeles.

Wednesday, November 30: The bloggers at Dartmouth’s Rauner Special Collections Library are big fans of the Aires: “As great as it was to see them on national television over these past weeks, we’ve equally enjoyed seeing them perform on campus and even right here in Rauner (they loved Webster Hall’s acoustics!). We’re proud of the Aires and are pleased to hold their records—in both senses of the word.” Read more about the Aires memorabilia available at Rauner.

Tuesday, November 29: As the Aires’ time with The Sing-Off winds down and they prepare to return to campus for fall term final exams, they send this message of gratitude to their Dartmouth fans on campus and beyond: “The Sing-Off has been an incredible experience of learning and growth that we could never have accomplished alone. We are humbled to have come this far and extend our gratitude to the entire Dartmouth community. Thank you for your support, encouragement, and for sharing this journey with us!”

Monday, November 28: As the Aires performed live from Los Angeles tonight, hundreds of students and others gathered on campus at the watch party for The Sing-Off finale. When the results of the votes were announced, the Aires came in second, ahead of Urban Method and behind winners Pentatonix.

Although it wasn’t shown on the broadcast, the Aires sang “Somewhere” from West Side Story as their swan song to a studio audience that included many of their parents. Dartmouth Now’s source in the live audience and on the red carpet also reported that the Aires were genuinely excited for Pentatonix, with whom they had become friends through the show.

Following the live show, the Aires were swept off to the red carpet for media interviews, where the TV stations all asked the Aires to sing their call letters.

Host Nick Lachey and Judge Ben Folds commented that they both stand ready to become official Dartmouth Aires, and Folds said he had a great time singing with the Aires in the finale (they performed Folds’s song, Not the Same, together).

Showing their Dartmouth pride, the Aires sang the Alma Mater on the red carpet, to applause from all present.

With the show over, the Aires are staying on in L.A. to film the holiday special that will air next Monday, December 5 (though Danny Freeman ’13 is heading straight back to London to complete the fall term government Foreign Study Program). And, of course, they are back to studying for finals, which begin on Saturday!

Monday, November 28: The Dartmouth Aires are in L.A., where they have been rehearsing long hours to prepare for the finale of “The Sing-Off” tonight. The last two days have been especially busy, with 8 a.m. calls and rehearsals lasting until around 10 p.m. “We’re performing a lot more songs than we usually do and because of that there’s more choreography to learn,” says Xavier Curry ’14. “There’s more to remember in one week than we’ve had before.”

Adds Ethan Weinberg ’12, “There’s definitely less pressure in terms of avoiding elimination, but logistics are much more complex with a live show, such as working in things like quick costume changes and getting our songs and choreography immaculate.”

Another change from filming the show last summer is that the Aires now have to squeeze in study time between rehearsals. “Schoolwork has been an extra challenge,” admits Curry. “The fact that finals are next week has everyone a little bit on edge. I finished a seven-page paper the day before we left. Now I just have to study some Russian and write a sonata for Music 20, which I’ve been able to work on a little bit.”

It was another early day for the Aires this morning, with a 7:15 a.m. call. After a quick breakfast, they’ll do a run-through of the entire show, eat dinner, and then it will be show time. “It’s going to be great,” says Curry. “The mood is very positive. We’re all really proud of what we’ve accomplished, regardless of whether we win. We’ve gotten so much exposure and support from our fans and families. We’re relishing this opportunity to show the world what we’ve got tonight and just have a good time.”

Sunday, November 27: Voting has now concluded, and the Aires are in Los Angeles rehearsing for The Sing-Off’s live finale tomorrow night. See what they were thinking as they departed for the west coast in this video (above). The Sing-Off winner will be revealed when the show airs at 8 p.m ET. If you are near campus, come and cheer on the Aires at the Watch Party in Collis Common Ground. The event is open to all and light refreshments will be served.

Monday, November 21: Following some suspenseful moments, the Dartmouth Aires came out ahead in tonight’s episode and have moved ahead into The Sing-Off’s finale! The judges’ work is done, and as Host Nick Lachey said, now it’s “Your turn to cast your votes and choose the champion.” Show your support for the Aires and vote for them by phone (call 1-877-6-SING-03) text message (text 3 to short code number 97979), or online.

Tonight each group performed a “master mix” of songs by two artists, followed by a judge’s choice song.

The Aires opened with an ambitious mash-up of “Born this Way” by Lady Gaga and “Sympathy for the Devil” by the Rolling Stones. They brought passion and drama, but the judges weren’t completely won over. For the second performance, the judges chose “Shout” by the Isley Brothers as a good fit for the Aires’ “theatrical” style.

“Shout” made a stronger impression—“The Dartmouth Aires at its best” according to Judge Shawn Stockman. Of Michael Odokara-Okigbo ’12’s lead vocal, Judge Sara Bareilles said, “You perform like you’ve been doing this for 35 years, you have so much heart.”

Judge Ben Folds, who said he grew up listening to the Isley Brothers, Otis Redding and James Brown, told Odokara-Okigbo, “Michael you’re a classic singer. I haven’t really heard a singer do what you’re doing, really convincingly for me, that moves me in that way, since I was a kid listening to those records. You’re a total star.”

“The rest of the group, you’re all working together toward the same things,” Folds said. And he singled out bass Dan Leopold ’10, who he said was “nailing” the swing parts of the song.

When the results were announced, Urban Method and Pentatonix moved ahead to the finale, but the judges were undecided about the one remaining spot in the final three. To determine whether it would be Afro Blue or the Dartmouth Aires, each group revisited its strongest performance of the season. After an emotional reprise of Queen’s “Somebody to Love,” the verdict was in. For both Bareilles and Ben Folds, the Aires’ consistent strength throughout the season put them ahead and into the finale.

Viewers may vote up to 10 times per method (phone, text, and email), so vote early and vote often! Then, watch again next Monday, November 28 at 8 p.m. ET when the winner will be revealed in a live finale.

November 17: Before they appeared on NBC’s The Sing-Off, the members of the Dartmouth Aires all chose to attend Dartmouth for their college experience. In this video, see what Ethan Weinberg ’12, Michael Odokara-Okigbo ’12, Will Hart ’12, and Henry Luehrman ’12 have to say about the institution that brought them together.

Monday, November 14: Another week, another Sing-Off, and the Dartmouth Aires are still in the running. Their R&B renditions of “Ignition (Remix)” by R. Kelly and “Midnight Train to Georgia” by Gladys Knight and the Pips, earned the Aires a place among the four remaining groups. “Xavier, you are so fantastic on stage,” said Judge Sara Bareilles of his performance on “Ignition.” Following “Midnight Train,” Ben Folds praised Dan Leopold ’10’s “nice work on the low end,” after having previously asked to “see more out of the bass and drums” from the Aires.

On campus, a crowd gathered in Berry Library to watch the show and meet the Aires (see photos above). Ethan, Will, Nate, Xavier, Henry, and Michael were on hand to gave out prizes for Aires trivia questions. They were also live-Tweeting and answering questions on Facebook during the broadcast.

Dartmouth will host another watch party next week, Monday, November 21 in Collis Common Ground from 8-10 p.m. ET. This critical episode will determine the final three groups from which viewers will vote for the winner. See you there!

Monday, November 14: You’ve watched the show, you’ve seen the interview, read their biographies, kept up with the news, followed them on Twitter, liked them on Facebook … Need more Aires? Absolutely! The Aires are among the five remaining groups vying for the grand title on The Sing-Off. Come cheer them on at a watch party in Novack Café during tonight’s episode, 8 to 10 p.m. ET. Aires members will attend the party, and the event is open to all. Can’t be there in person? Join a live question and answer session with the Aires on Dartmouth’s Facebook page, also from 8 to 10 p.m. on Monday.

Monday, November 7: On an episode of The Sing-Off that was a little bit country and a little bit rock ‘n’ roll, the Dartmouth Aires demonstrated once again that they can do it all and advanced to the final five groups. Judges praised the Aires’ energy and entertainment value in both of their performances—Twisted Sister’s ”We’re Not Gonna Take It“ and Big & Rich’s ”Save a Horse (Ride a Cowboy).“ After doffing their cowboy hats for judge Sara Bareilles tonight, the Aires will perform next on Monday, November 14, at 8 p.m. ET.

Friday, November 4: Wonder how this all started? Check out the Aires’ audition video for The Sing-Off, in which they perform a medley of Kanye West songs.

Tuesday, November 1: Although they didn’t perform Queen’s signature song, “We Will Rock You,” the Dartmouth Aires definitely rocked The Sing-Off’s judges last night with their medley of three Queen hits: “Killer Queen,” “Bohemian Rhapsody,” and “Somebody to Love.” Judge Sara Bareilles said it was her favorite performance to date on the show, and the Aires were one of six groups to advance in the competition. Like what you hear and see in the video? Vote for the Aires as your favorite on the NBC website.

NBC videos of performances on The Sing-OffAdditional videos

You know they can sing and perform with the best. But the Aires—who count engineers, athletes, and a novelist among their ranks—do much, much more. As the competition heated up, Dartmouth Now spoke with the 16 Aires appearing in The Sing-Off to learn more. Read their bios to see what they are up to off the stage.

Dartmouth Aires in the News 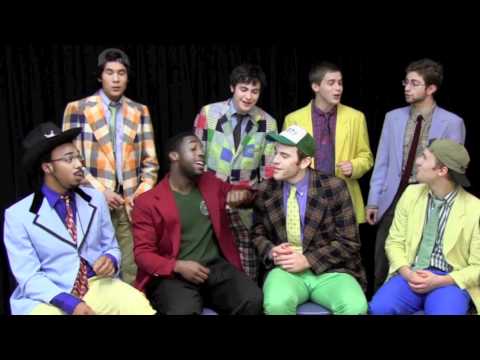