Video: The Dartmouth Aires Advance Again on NBC’s The Sing-Off

With a rousing a cappella rendition of the Flo Rida hit, “Club Can’t Handle Me,” the Dartmouth Aires advanced to the next round of NBC’s The Sing-Off on Monday, October 24. The Aires were one of seven groups to move on in the all-vocal competition, and will perform again on October 31.

This week’s episode required the groups to perform a hip-hop song. As Clark Moore ’13 pointed out on the show, while the group performs a variety of musical styles, hip-hop is usually not one of them because of the limiting four-chord arrangements. But the Aires had the studio audience on their feet by the end of the song, as Michael Odokara-Okigbo ’12 traded off on lead vocals with Henry Luehrman ’12, who rapped for only the second time.

“I wrote down swagger,” said judge Sara Bareilles after the Aires’ performance. “I love the energy you project on stage. You are enjoying what you’re doing so much and it’s really, really fun to watch.”

The Aires spent the summer in Los Angeles taping The Sing-Off, which is now in its third season. When the program premiered on September 19, Dartmouth’s oldest a cappella group was one of 16 groups contending for the grand prize of $200,000 and a Sony Music recording contract. The winning group will be revealed in a live finale on NBC.

Since their debut on the show, a number of the Aires’ members have been featured by their hometown newspapers (see links below). The group also conducted a video interview with Jessica Chen ’12, Dartmouth Now’s Whitney Campbell intern, shortly after their first performance on the show aired September 26.

“I want to thank everyone for supporting us as we move forward. We’re all very excited and know we could not be doing what we’re doing if not for the Dartmouth community and alumni, especially all of the Aires who came before us,” said Ethan Weinberg ’12. “I’ve heard that alums have been holding viewing parties, which is very humbling. I am glad that the show brings alumni together around the country.” 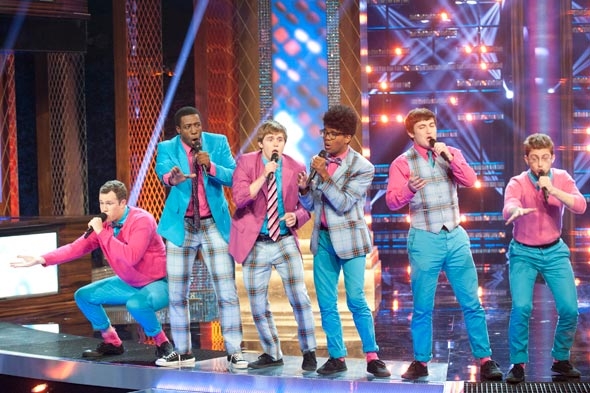 Videos of all Dartmouth Aires Performances on The Sing-Off:

Date
5/06/2016
Body
Dartmouth is No. 1 on College Magazine’s list of the top 10 colleges and universities with excellent male a cappella groups.“The Dartmouth...
Articles

Date
11/11/2015
Body
In addition to their performance of Mozart’s Requiem and sections of The Magic Flute at their fall concert on Nov. 1, the students in the...