Starving orangutans in Borneo may be teaching us new lessons about human evolution. 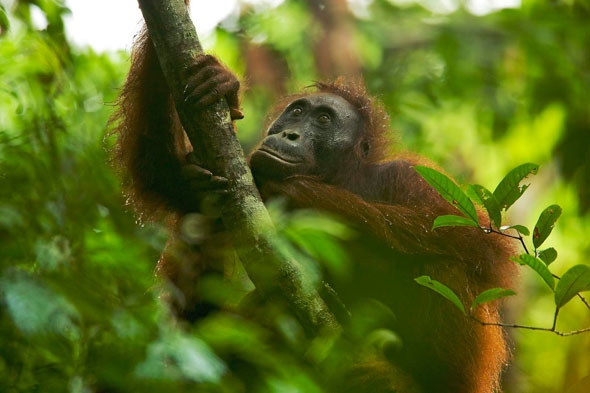 Orangutans in Borneo are poised on the edge of an ecological precipice, barely hanging on. (photo copyright Tim Laman)

Nathaniel Dominy, associate professor of anthropology, has been studying the dietary habits of these apes: what food they eat and how they digest it. “We are interested in how orangutans cope with food-limited environments because it may give us a glimpse into what early human ancestors were facing,” Dominy explains.  He and his colleagues report on a study of orangutans under dietary stress in Borneo in the December 14 online issue of Biology Letters, a journal of The Royal Society.

The apes that gave rise to the earliest human ancestors had teeth that are much like orangutan teeth. The resemblances are particularly strong between the teeth of the pre-human apes and those of the stressed animals living on Borneo. Dominy suggests that the orangutans’ diet may have exerted a selective pressure on their molar teeth. If we understand the physical properties of their food, then we may have some idea of why humans evolved the teeth that we have.

The Borneo environment is stressful. The soil is not very fertile and plants crop unpredictably, only producing quantities of fruit every four or five years. When they do bear fruit, the whole forest produces at once. The animals gorge themselves, put on fat, and then live off these reserves for the next three to four years. Unchecked logging that is reducing orangutan habitat worsens this already inhospitable situation.

Orangutans prefer ripe, soft, juicy fruits but during the “off-years” on Borneo when nothing else is available, the orangs resort to eating very hard and tough foods. Dominy describes how they rip bark off trees and eat the starchy tissues behind the bark. They will also eat very hard seeds. This far less nutritious diet seems to supply just enough protein to survive.

The five-year study described in the Biology Letters paper documents the adaptive metabolism of these apes in these protein-deficient hard times. Orangutan urine was collected on Borneo and analyzed for dietary markers, such as ketones, which increase when the body breaks down fat for energy. When fruit abundance was lowest, the ketones surged, demonstrating that the animals were burning their fat reserves—using more energy than they were taking in. As long as the fat holds out, the situation is tolerable.

When body fat is depleted, the next stage is cannibalizing muscle tissue. Elevated nitrogen isotopes in the urine of some individuals indicate that muscle wasting was indeed a source of the protein that kept the animals alive. 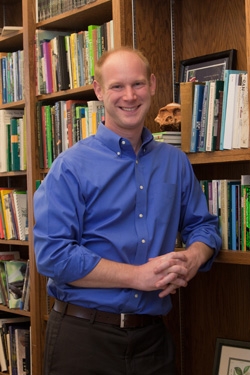 Professor Dominy considers the lean years for orangutans on Borneo to be a selective pressure that led to evolutionary adaptations since the population became isolated 400,000 years ago. He argues that the larger molars and more robust jaws among the Borneo orangutans developed in response to the hard, tough foods they consumed during the periods between fruit availability—an enduring adaptation to an occasional situation.

Recent studies of wear patterns on the huge molars of early hominids suggest that they only ate a more physically challenging diet some of the time. These hominids may be displaying an adaptation that helped them to get through evolutionary pinch points, similar to what the orangs encounter.

“Perhaps the hard objects were things they ate only very occasionally under ecological duress,” Dominy muses. “It is not what they ate regularly that matters. It is what they were eating during crunch times. Because they routinely go through these dire times, orangutans may be a good model for what happened to human ancestors in deep time.”