Rudolph the Red-Nosed Reindeer Shines on at Dartmouth 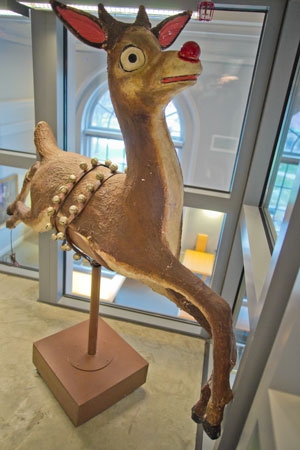 You no longer have to wait for a foggy Christmas Eve to see Rudolph the Red-Nosed Reindeer. Santa’s most famous reindeer can be found year-round in a more protected habitat, high above the Rauner Special Collections Library on the fourth level of the glass-enclosed rare book stacks.

This paper mâché Rudolph once graced the suburban Chicago lawn of his creator, the late Robert Lewis May, Class of 1926. In the early 1980s, however, a group of May’s classmates joined forces to finance the fragile reindeer’s restoration and to bring Rudolph to Dartmouth. He first took up residence in the Hopkins Center’s Barrows Rotunda before ultimately migrating to Rauner.

Rudolph the Red-Nosed Reindeer began as a children’s book, a holiday giveaway designed to draw shoppers into Montgomery Ward department stores during the 1939 Christmas season.

May crafted the story while working as a copywriter in Ward’s retails sales department in Chicago, and wrote it as a poem in the style of ’Twas the Night Before Christmas.

It was a difficult time for the Phi Beta Kappa Dartmouth alumnus. His wife was dying and he hoped to cheer up his five-year-old daughter, Barbara, with the story about a young reindeer who isn’t accepted because of his physical difference, yet ultimately helps save Christmas thanks to his shiny nose.

After changing the reindeer’s name from “Rollo” to “Rudolph,” the story was approved and more than two million copies were printed and distributed through Montgomery Ward’s 800 stores and catalogue offices.

Newspaper columnists called it “the biggest first edition in history,” and a Montgomery Ward executive wrote to May, “I for one predict a wide acclaim for the four-legged W.C. Fields.” He was right—stores were overrun with shoppers eager to get their free copy, leading to shortages. 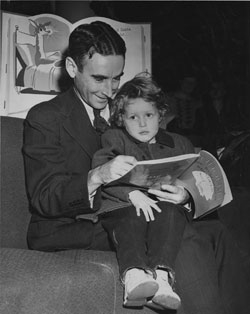 A huge hit with more than 5 million copies in print by 1946, Rudolph the Red-Nosed Reindeer endures to this day as one of the most beloved Christmas stories of all time.

Another thing that makes this story remarkable, says College Archivist Peter Carini, is that Montgomery Ward released the complete copyright back to Robert Lewis May in January 1947. May had substantial hospital bills related to his late wife’s illness, so a Ward vice president lobbied to return the copyright to the story’s creator.

“I see this as a wonderful example of how corporations viewed their role as part of a civil society,” says Carini.

May licensed hundreds of Rudolph-related items over the years, but perhaps his second biggest contribution to popular culture was the hit song his brother-in-law Johnny Marks wrote about Rudolph. Recorded by Gene Autry in 1949, the record sold 2 million copies.

Also extremely popular is the Rudolph stop-motion animation television program that premiered in 1964, featuring the voice of Burl Ives. This show continues to airs every December, and according to the CBS website, is the longest-running holiday special in television history.

Rauner Library is the home of the Robert May collection, which contains copies of the original soft-covered books, Rudolph stuffed animals and merchandise, and a 54-page scrapbook that details the creation and marketing of Rudolph. The scrapbook was conserved in 2010 by Preservation Services intern McKey Berkman and archives research assistant Maria Fillas ’11, under the direction of Collections Conservator Deborah Howe.

While May wrote a few other children’s books before his death in 1976, none of them achieved the level of fame that Rudolph did. He was once quoted that he’d spent his life “working for a reindeer.” But as May surely knew, Rudolph is one reindeer that will go down in history.