Rudolph’s Story: Dear to Many, Year After Year

The heroic little red-nosed reindeer was created by Robert L. May ’26 in 1939. 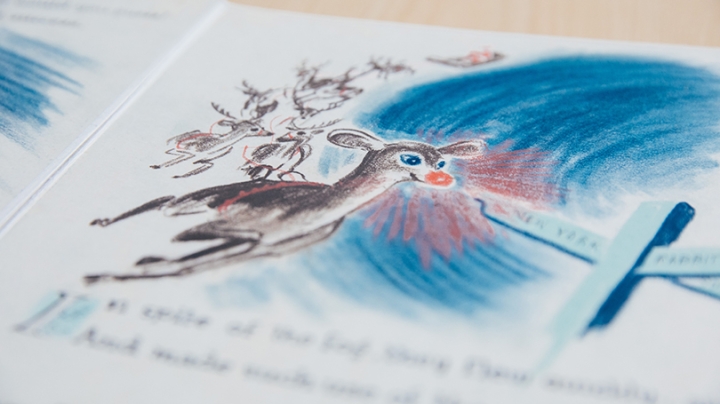 A page from the original book, which is part of the collection at Rauner Special Collections Library. (Photo by Robert Gill)
12/20/2016
Body

How did Rudolph get that red, red nose? It’s a question children ask year after year when they hear the story of Rudolph the Red-Nosed Reindeer, written by Robert L. May ’26. And every December, the media return to the alumnus’ tale of Santa’s four-legged helper and his exemplary work ethic.

“Oh, Rudolph with your nose so bright, where did you come from?”

That’s the headline on a recent Washington Post story about the famous reindeer with the unusual nose. The answer, writes the Post, can be found in a new book, by Ronald Lankford Jr., published by University Press of New England, about Rudolph the Red-Nosed Reindeer, an original manuscript of which can be found at Rauner Special Collections Library.

“Rudolph was the creation of Robert L. May, who dreamed him up while working as an advertising copywriter for the great Chicago-based retail chain Montgomery Ward,” writes the Post. “After attending Dartmouth College—thus sharing an alma mater with other famous creators of fanciful tales for credulous youngsters, including Theodor Geisel ’25 and Fred Rogers ’50—May returned to the Midwest, where he invented the story of the lonely Laplander in 1939.”

(May later left Montgomery Ward to manage the reindeer’s career, which really took off after May’s brother-in-law Johnny Marks wrote the “Rudolph” song made famous by Gene Autry in 1949.)

Where Did the Story Begin?

In Chicago, the television station WBEZ takes a look at the history of the tale, asking in a headline, “What’s that building? Where Rudolph got his red nose.”

“Rudolph the red-nosed reindeer has been a household name for decades,” says commentator Dennis Rodkin in an interview with WBEZ. “Yet, in 1939, the colorful creature was just an idea in the brain of a copywriter at Chicago’s Montgomery Ward department store who was charged with designing the company’s annual Christmas coloring book. Montgomery Ward printed millions of copies of the book that year and Rudolph quickly became as iconic as Santa Claus.”

Rodkin mentions that in May’s papers, which belong to Rauner, there are few clues about how May came up with his story, though it may have been inspired, in part, by trips May and his little daughter made to Chicago’s Lincoln Park Zoo, where they admired the resident deer.

In a blog post this week, Rollo the Red-Nosed Reindeer, Rauner writes that Rudolph was just one of many possible names May came up with for the story’s hero—Rollo being another.

“So, it was a bit of a shock when searching our collections for materials related to Franconia Notch we turned up Jacob Abbot’s Rodolphus: A Franconia Story, ‘by the Author of the Rollo Books.’ The Rollo series was still very popular at the turn of the century, and it is hard to believe that young Robert May didn’t encounter any of them as a child. Did he also read Rodolphus? Did the two names stick in his head just enough to make it onto his list and both reach the final choices? It is a stretch, but there is a chance. More likely it is just an odd coincidence. Still, it is fun to think that this book may have inspired, at least in name, May’s legendary Rudolph.”

Rauner is the home of the Robert May collection, which contains copies of the original soft-covered books, Rudolph stuffed animals and merchandise, and a 54-page scrapbook that details the creation and marketing of Rudolph.

Dartmouth’s Dominy on the Science Behind That Colorful Nose

Last year, prompted by a question from his then 4-year-old daughter, Professor of Anthropology Nathaniel Dominy wrote a paper about the properties of reindeer eyes and how they might explain the advantage of a reindeer having a bright red nose like the famous Rudolph. The paper was published by the website Frontiers for Young Minds. There’s a downside to the brightness of the nose, which is that it may cause the reindeer to use more than the average number of calories as it goes about its activities, such as pulling Santa’s sleigh, wrote the Associated Press last year in an interview with Dominy. “One way to heat your body is to burn fuel. You do that by burning fat and calories. Children should be aware of Rudolph’s condition and leave high-calorie foods for him,” Dominy told the AP.

This year, Dominy took time to read aloud May’s famous little book at Rauner. Read along with this original version of the Rudolph story below. 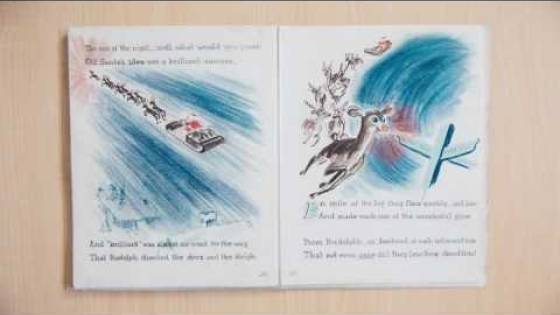