Organic Food Sweetener May Be a Hidden Source of Dietary Arsenic 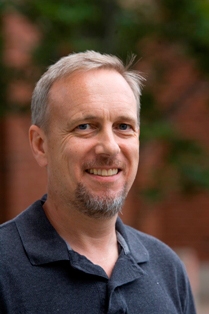 As people seek healthier dietary regimens they often turn to things labeled “organic.” Lurking in the background, however, is an ingredient that may be a hidden source of arsenic—an element known to be both toxic and potentially carcinogenic.

Dartmouth researchers and others have previously called attention to the potential for consuming harmful levels of arsenic via rice, and organic brown rice syrup may be the latest culprit on the scene.

With the introduction of organic brown rice syrup into food processing, even the savvy consumer may unknowingly be ingesting arsenic. Recognizing the danger, Brian Jackson and other Dartmouth researchers conducted a study to determine the concentrations of arsenic in commercial food products containing organic brown rice syrup including toddler formula, cereal/energy bars, and high-energy foods used by endurance athletes.

Jackson, director of the Trace Element Analysis Core Facility at Dartmouth and a member of the college’s National Institute of Environmental Health Sciences (NIEHS) -funded Superfund Research Program, is lead author on the study published February 16, 2012, in Environmental Health Perspectives. His collaborators include researchers in Dartmouth’s EPA and NIEHS-funded Children’s Environmental Health and Disease Prevention Center.

Jackson and his colleagues purchased commercial food products containing organic brown rice syrup and compared them with similar products that didn’t contain the syrup. Seventeen toddler formulas, 29 cereal bars, and 3 energy “shots” were all purchased from local stores in the Hanover, N.H., area. 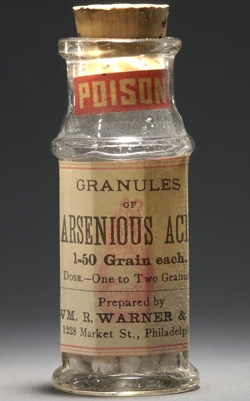 Arsenic, today known to be both toxic and potentially carcinogenic, was widely used as a medicine in the 19th and 20th centuries. (Photo by National Museum of American History, Behring Center, Smithsonian Institution)

Of the 17 toddler milk formulas tested, only two had listed organic brown rice syrup as the primary ingredient. These two formulas, one dairy-based and one soy-based, were extremely high in arsenic, more than 20 times greater than the other formulas. The amount of inorganic arsenic, the most toxic form, averaged 8.6 ppb for the dairy based formula and 21.4 ppb for the soy formula.

This is of concern because these concentrations are comparable to, or greater than, the current U.S. drinking water limit of 10 ppb, and that limit does not account for the low body weight of infants and the corresponding increase in arsenic consumption per kilogram of body weight.

The Dartmouth researchers also tested 29 cereal bars and three types (flavors) of an energy product obtained from a supermarket. Twenty-two of the bars listed at least one of four rice products—organic brown rice syrup, rice flour, rice grain, and rice flakes—in the first five ingredients. The cereal bars ranged from 8 to 128 ppb in total arsenic; those that had no rice ingredients were lowest in arsenic and ranged from 8 to 27 ppb, while those that did contain a rice ingredient ranged from 23 to 128 ppb total arsenic.

With recent news coverage of the potential for rice to contain arsenic, educated consumers may be aware that cereal/energy bars containing rice ingredients could also contain arsenic.

The authors note that, “By contrast the energy shots are gel-like blocks and, like the formulas, it would not be immediately apparent to the consumer that these too are rice-based products.” One of the three flavors of energy shots tested revealed about 84 ppb total arsenic (100 percent inorganic arsenic), while the other two showed 171 ppb total arsenic (53 percent inorganic arsenic).

Jackson and his colleagues conclude that in the face of the increasing prevalence of hidden arsenic in food, and the absence of U. S. regulations in this area, “there is an urgent need for regulatory limits on arsenic in food.”