Emma Smith, a member of the Dartmouth Class of 2013, has been chosen as a 2012 Harry S. Truman Scholar. The scholarship awards up to $30,000 to college juniors to pursue graduate studies in public service fields and also provides assistance with career counseling, internship placement, graduate school admissions, and professional development. 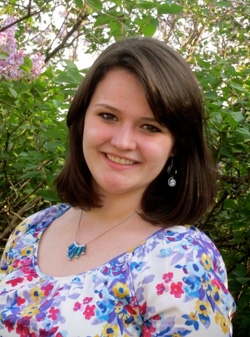 Emma Smith ’13 has been selected as a 2012 Truman Scholar. The Truman Scholarship will enable her to pursue a Master of Laws in Human Rights, Conflict, and Justice at the University of London directly after graduating from Dartmouth. (photo courtesy Emma Smith ’13)

Smith is a history and geography double major from Paola, Kan. She is also an enrolled member of the Osage Nation. The Truman Scholarship will enable her to pursue a Master of Laws in Human Rights, Conflict, and Justice at the University of London directly after graduating from Dartmouth. “Language study, including Arabic, will also factor into my degree,” she says. “Afterwards, I’ll be equipped to enter into on-the-ground work in conflict areas like Sudan and South Sudan. I want to engage directly with communities in need, but I am also interested in helping shape U.S. and international policies towards gross human rights abuses.”

Smith, who is off campus this term, received word of her selection as a Truman Scholar from Dartmouth Provost Carol Folt on March 27. Smith explains that “the surprise phone call with Provost Folt was the end of over a year of preparing essays, practicing interviews, and digging really deep to put all that I am, all that I believe, and all that I want to do in life on paper.” She continues, “Now that the news has sunk in, I am overwhelmed by how blessed I am to have received this honor. I am also thankful of how much faith and how many resources the Truman Foundation, Dartmouth, and my family and friends have put in me, but I know that all of this comes with the responsibility to pay it forward.” 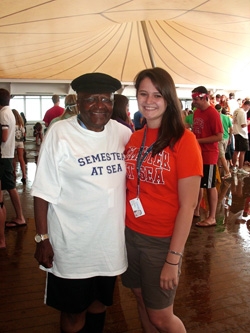 Nobel Peace Prize Winner Archbishop Desmond Tutu (left) served as a lecturer during Emma Smith’s ’13 Semester at Sea in 2010. “His philosophy of ‘ubuntu,’ which means ‘I am because we are,’ has influenced how I approach all aspects of my life,” says Smith. (photo courtesy Emma Smith ’13)

At Dartmouth, Smith has been a leader of STAND, the student-led division of the organization United to End Genocide, serving as chapter president since her sophomore year, and as STAND’s national Sudan Education Coordinator. She has worked as an undergraduate resident advisor, took part in the London Foreign Study Program conducted by Dartmouth’s Department of History, and also studied abroad as a participant in the fall 2010 Semester at Sea program, sponsored by the University of Virginia.

In direct response to a volunteer experience during Semester at Sea, Smith founded Mercy’s Dream Ministries in the fall of 2010, which she continues to run. The program provides financial and on-the-ground support to the Egyam Orphanage located in Takoradi, Ghana, as well as to children in the surrounding communities.

Nobel Peace Prize Winner Archbishop Desmond Tutu served as a lecturer during Smith’s Semester at Sea. “I had the opportunity to interact with him every day, and seek his advice about the creation of Mercy’s Dream Ministries,” Smith recalls. “His philosophy of ‘ubuntu,’ which means ‘I am because we are,’ has influenced how I approach all aspects of my life.”

The 54 Truman Scholars for 2012 were selected from among 587 applications from 272 colleges and universities. Among the qualifications: recipients must be U.S. citizens, have outstanding leadership potential and communication skills, and be committed to careers in government or the not-for-profit sector. Smith is Dartmouth’s 23rd Truman Scholar since the award was instituted in 1977. For more information on the Truman Scholarship, see Dartmouth’s National Scholarships/Fellowships website.