The award will support the sociology major’s graduate study of social movements. 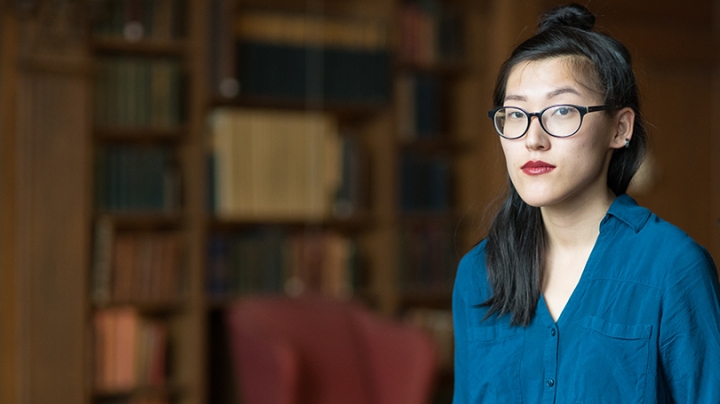 “A lot of changes that are being made on this campus are due to students speaking up,” says Sera Kwon ’17. “That has influenced my academic interests, and it’s influenced my being able to succeed here as a person.” (Photo by Eli Burakian ’00)
4/19/2016
Body

Sera Kwon ’17 has been named a Beinecke Scholar, one of 20 college juniors nationally to receive the honor.

The award, which supports the “graduate education of young men and women of exceptional promise,” provides award winners $4,000 prior to entering graduate school and an additional $30,000 while they are attending graduate school.

“It’s affirming,” says Kwon, a sociology major from Queens, N.Y. “It means that somebody thinks my research is worth investing in, and shares my commitment to diversifying academia. It’s also a responsibility, because I’m like, all right, now I really have to work hard.”

Kwon plans to use the scholarship to continue studying social movements—a field she discovered through a course with Associate Professor of Sociology Marc Dixon. As a first-year student, Kwon had reported on student protests for the College newspaper, The Dartmouth, learning “about the motivations of students staging protests and other disruptive actions,” she says. In class, analyzing the theory behind these different kinds of activism “blew my mind.”

Dixon invited Kwon to become his research assistant on a project analyzing legislation passed in former Confederate states during the Civil Rights Movement.

“Her input was more that of a co-author than an assistant,” Dixon says. “Now Sera is carving out an important research agenda of her own on race and social movements. I am excited to follow her work. Sera has that great mix of talent, intellectual curiosity, and work ethic that will allow her to thrive as an academic. The Beinecke Scholarship couldn’t go to a better candidate.”

The daughter of Korean immigrants, Kwon has long been interested in the dynamics of racial constructs in America and beyond. In high school, she became fascinated by the Middle East, traveling to Jordan and Morocco to study Arabic through the U.S. State Department’s National Security Language Initiative for Youth. In Morocco, she witnessed protests for the representation of indigenous people, an experience she delved into more deeply at Dartmouth. “I took Professor (George) Trumbull’s class on North African history and wrote a paper exploring my interest in indigenous peoples and the Arabization of Morocco,” she says.

Kwon is a fellow in the Mellon Mays Undergraduate Fellowship program, which supports students from diverse backgrounds in pursuing careers in academia. Mellon Mays has exposed Kwon to role models, including Yvonne Kwan, a sociologist and postdoctoral fellow with the Society of Fellows, who serves as her mentor in the program. “She is the first Asian woman professor I’ve had, so seeing that representation means a lot to me,” Kwon says.

“I’m thrilled for Sera,” says Professor Michelle Warren, the faculty coordinator of the Mellon Mays program. “She has accomplished so much already. The Beinecke is a great honor as well as a practical means for her to get started right away with her PhD.”

In addition to her work as a research assistant for Dixon, Kwon has assisted Warren’s research into Dartmouth’s three dissertation fellowship programs, part of a Mellon Foundation-funded planning grant for faculty diversity. A James O. Freedman Presidential Scholar, Kwon is working with Associate Professor Ayo Coly on an annotated bibliography for a book about homophobic nationalism and state homophobia in Senegal.

Kwon is president of Asian American Students for Action, a group she helped form to push for an Asian American studies program and for greater diversity in the curriculum and in faculty hiring. She serves on the board of the Women of Color Collective, was co-director of Dartmouth QuestBridge Scholars, and served as the pan-Asian liaison for the Inter-Community Council.

“I’m grateful for all the opportunities I have here—for being here on a full scholarship, for the professors who regularly take time to offer advice, and for the administrators and friends I’ve made here who have supported me,” Kwon says.

In particular, she says she is grateful for the activists at Dartmouth who speak out for what they believe. “A lot of changes that are being made on this campus are due to students speaking up,” she says. “That has influenced my academic interests, and it’s influenced my being able to succeed here as a person. So I want to recognize the importance of that.”

The Beinecke Scholarship Program was established in 1971 by the board of directors of the Sperry and Hutchinson Co. to honor Edwin, Frederick, and Walter Beinecke. Since 1975, the program has selected more than 570 college juniors from 100 undergraduate institutions.

For information about applying for Beinecke Scholarships and other opportunities, visit Dartmouth’s National Scholarships/Fellowships website.