Jahjaga presented Strickler with the Humanitarian Medal of Mother Teresa at the start of a public lecture in which she told of her young nation’s successes as part of a two-day visit to Dartmouth.

The president said Strickler, who in 1999 began organizing medical exchanges in Kosovo to care for refugees following the country’s war of independence, “stood up for the people of Kosovo in very difficult times.” (See accompanying sidebar.) 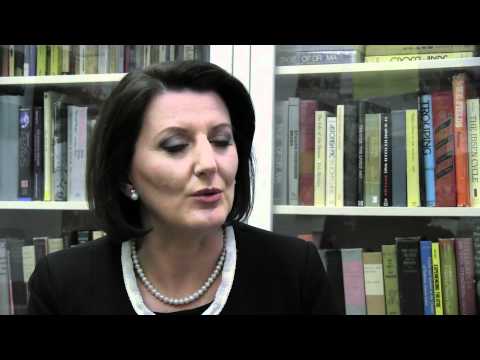 To a packed audience in the Hopkins Center’s Moore Theater, Jahjaga said her four-year-old nation has emerged from war a better place.

“The goal is to build a functioning democracy, a just society where the rule of law is established and values such as human rights and equality of all people regardless of gender, race, ethnicity, or religion are restored,” she said. “This century is the century of integration, and not the century of divisions. In the process of building our country, we built a stronger foundation of unity.” 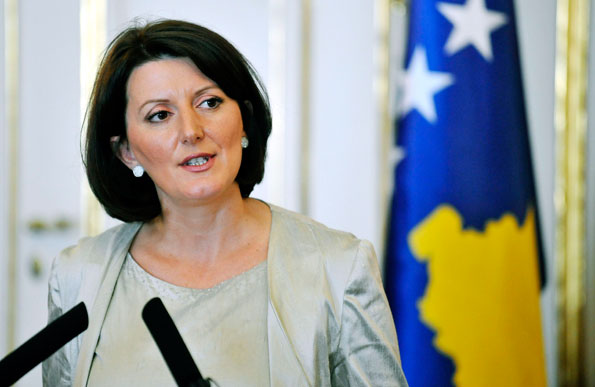 Kosovo President Atifete Jahjaga speaks before to a capacity crowd at the Hopkins Center’s Moore Theater. (photo by Eli Burak ’00)

Jahjaga’s visit includes meetings with students, faculty members, and Dartmouth Medical School physicians to discuss a variety of issues. She came to Dartmouth at the invitation of Provost Carol Folt, who is also an environmental scientist and had visited Kosovo this past fall, lecturing there. Folt told the Moore Hall auditorium that her trip allowed her to see the roots of her own Albanian heritage for the first time. She met Jahjaga while on the trip and invited the new president to come to Dartmouth.

Long History Overseas for Dr. James Strickler Former Dartmouth Medical School Dean Dr. James Strickler ’50, DMS ’51, has been creating and implementing health programs overseas for more than three decades, including activities in Kosovo, which began with DMS faculty providing critical care in the war-torn country. Since 1999, there have been more than 200 exchanges of faculty and students from Dartmouth and Kosovo.

Strickler has been awarded the Humanitarian Medal of Mother Teresa, an award given by the president of the Republic of Kosovo to citizens and foreigners who contribute to the field of humanism.

“We are grateful to you for all you have done for the people of Kosovo,” Kosovo President Atifete Jahjaga told Strickler.

Strickler said he was “surprised and overwhelmed” by the honor. But, he told Jahjaga, “We get more out of it than we give.”

“Jim has contributed greatly to the success of Dartmouth’s Global Health programs. We’re very proud of Jim. The tremendous impact his work has had on the lives of people in Kosovo, New Hampshire, and around the world is an inspiration to all of us,” said Wiley “Chip” Souba, MD, current dean of the medical school.

Folt said Jahjaga’s “dedication, wisdom and accomplishments in building a new nation provide a powerful example for all of us. We can learn so much from [your] experiences and all that Kosovo has achieved.”

Two years ago, Dartmouth and American University in Kosovo signed an agreement that has Dartmouth working with Kosovo’s only private nonprofit university on a number of initiatives, including helping the eight-year-old university prepare for U.S. accreditation, conducting faculty and student exchange programs, and supporting curriculum development.

Student Edgar Sandoval ’14, from Waukegan, Ill., who met the president earlier in the day, said it’s important that Jahjaga tell the story of her young country and her role in its development.

“She’s laying down a foundation for what she can accomplish,” he said, adding that the president is inspiring “beyond words.”

Jahjaga, who was elected last April, at the age of 35, is the fourth person elected president of Kosovo. She began her professional career as a police officer, rising to the position of director of police in 2009, a post she held until her election.

In her lecture, she told students that her college days had been much different than theirs. She and her peers studied in safe houses, fearing discovery by police who would imprison teachers and “stop knowledge.”

“Now the children and the youth of my country learn in a regular school environment,” she said.

Jahjaga’s speech was exciting for many at Dartmouth yesterday, including Annemarie Aiello of Westwood, N.J., who has spent time in Albania—Kosovo’s neighboring country—and happened to be on campus to interview for a job when she saw notices of the speech.

“It’s interesting to hear her talk about Kosovo, where she came from, her story, and the nation’s rebirth,” said Aiello.

More on Dartmouth Now: More on President Jahjaga’s visit, including her discussion of leadership and women’s rights with faculty members, a visit to an undergraduate class, and discussion on health care with representatives from Dartmouth Medical School.

Date
2/10/2014
Body
During a much-anticipated conference at the University of Virginia, a panel of six college presidents, including President Phil Hanlon ’77...
Articles

Date
6/09/2013
Body
Dartmouth College conferred degrees on the Class of 2013 and bestowed on the new graduates a challenge to become the new Greatest Generation...