Faith E. Beasley, professor of French and women’s and gender studies, has been awarded a 2012 fellowship from the John Simon Guggenheim Memorial Foundation for “stellar achievement in the past and exceptional promise for continued accomplishment.” The award will allow Beasley to finish writing her sixth book, which will explore the link between France and India in the 17th century. 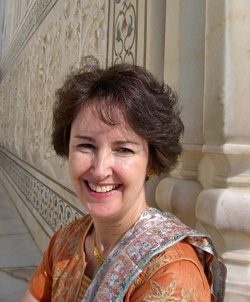 Professor Faith Beasley, pictured in front of the Taj Mahal, has won a 2012 Guggenheim Foundation fellowship that will enable her to complete her latest book exploring the link between France and India in the 17th century. (photo courtesy of Faith Beasley)

The research for her newest book, “Exotic Encounters: Versailles Meets the Taj Mahal,” builds on her pioneering work on French salon culture. The book will explore how one particular salon served as the nexus for the encounter between France and India during France’s Grand Siècle and the effect it had on early Enlightenment thought, culture, and literature in France and Europe.

“I am delighted that the Guggenheim Foundation has recognized Faith Beasley in this fashion,” says Adrian W. B. Randolph, associate dean of the faculty for the arts and humanities. “Her past work on gender and literature in 17th-century France has led her to this fabulous new project that recasts European developments in light of early modernity’s global character. Beasley’s success is a sign of the vitality of the humanities at Dartmouth.”

The 2012 fellowship winners include 181 artists, scholars, and scientists selected from over 3,000 applicants. Scores of Nobel, Pulitzer, and other prize winners are among the rolls of the foundation’s fellows. Past fellows include Ansel Adams, Aaron Copland, Langston Hughes, Henry Kissinger, Linus Pauling, Martha Graham, Philip Roth, and Eudora Welty.

Beasley’s first book, Revising Memory: Women’s Fiction and Memoirs in Seventeenth-Century France, chronicled the development of a strong female literary tradition in France. Her second book, Mastering Memory: Salons, History, and the Making of Seventeenth-Century France, addressed the question: If women were so important and salons so influential, why don’t we know more about them? She found that female influence, acknowledged in the 17th century and hailed as a defining characteristic of France, was later deliberately written out of the historical record. Beasley analyzed how this designation led historians and philosophers to rewrite the history of the salon and the forces that led them to do so.

“My current project came out of the research I did on my second book,” Beasley says. “A particularly influential salonnière was a Mme de la Sablière, who attracted the foremost intellectuals of her time. Even though well-known for supporting the work of La Fontaine, her name and influence are often relegated to a footnote.”

Beasley continues, “One famous participant in her salon was François Bernier, a philosopher, physician, and traveler who spent over a decade at the Mughal court in India. Bernier published his memoirs while a member of her salon. I became intrigued by this inadequately understood encounter between France and India, two influential and powerful 17th-century cultures. I ask: What effect did this encounter with India have on the mindset and cultural production of the court of Louis XIV?”

Beasley joined Dartmouth in 1986. She has published numerous articles and edited two volumes for the Modern Language Association, Approaches to Teaching Lafayette’s La Princesse de Clèves and Options for Teaching Seventeenth and Eighteenth-Century French Women Writers. In addition to her popular on-campus classes, she has directed many off-campus programs in France and co-developed a foreign-study program in India for Dartmouth. She has been elected or appointed to various positions in the Modern Language Association, the North American Society for Seventeenth-Century French Literature (of which she is a past president), and the Society for Interdisciplinary Seventeenth-Century French Studies. She is currently the editor of Cahiers du dix-septième, an interdisciplinary journal specializing in 17th-century France.