The earth sciences professor joins other top scholars and artists from across the U.S. and Canada. 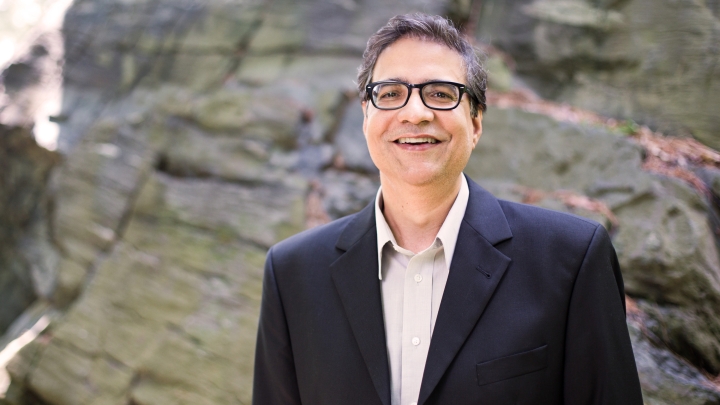 Professor of Earth Sciences Mukul Sharma has received a fellowship from the John Simon Guggenheim Memorial Foundation. In winning the Guggenheim award, Sharma joins 175 top scholars and artists selected this year from nearly 3,000 applicants from across the United States and Canada.

The grants, given annually to “individuals who have already demonstrated exceptional capacity for productive scholarship, or exceptional creative ability in the arts,” according to the foundation’s website, help provide six- to 12-month blocks of time in which fellows can work “with as much creative freedom as possible.” Previous winners include Nobel laureates and members of the National Academies of Sciences.

“I’m really humbled and honored that I’m part of this wonderful group of people,” says Sharma, who will use his fellowship to explore a novel strategy to help combat climate change.

Over a 12-month period, Sharma will explore the feasibility of using clay minerals to remove carbon dioxide from the atmosphere and sequester it in the ocean. The idea took root while he was exploring why wastewater from fracking is toxic and radioactive, one of several research problems he is involved with, and realized that organic carbon in black shale, rock used for fracking, is intimately associated with clay minerals down to a scale of nanometers.

Initially, Sharma wondered whether his thought experiment of scattering a combination of clay minerals across vast swathes of the ocean was “crazy,” he says. But after vetting the strategy with a renowned chemical oceanographer, he decided to pursue it further.

“Mukul Sharma’s work has consistently provided profound insights into the evolution of the earth and its resources,” says Provost Joseph Helble. “This recognition by the Guggenheim Foundation now gives him the flexibility to explore the use of inexpensive and abundant materials to capture carbon dioxide, an approach I believe essential if we are to slow the buildup of atmospheric CO2.”

The research is broad ranging, even for Sharma, who has worked on a wide variety of problems, including the behavior of platinum metals in the ocean, methane production on Mars, and the relationship between solar magnetic activity and terrestrial climate. In addition to geology and mineralogy, it will draw upon the fields of microbiology, marine biology, and chemical oceanography.

“In my mind this problem is much, much bigger than me to do alone,” says Sharma, whose still-growing team includes colleagues at Dartmouth and beyond. “This is important, because we want to save the world for our children and our grandchildren. And so, people have been very, very generous with their time, and they have done experiments that I could only dream of but not perform in my laboratory.”

Transition to a low-carbon global economy remains in the distant future, and there is no technology available that would rapidly, cheaply, and on a very large scale remove atmospheric carbon dioxide, Sharma says. It’s “a tall, tall order,” but sprinkling clay minerals on the ocean’s surface could remove a substantial fraction of carbon that humans are adding into the atmosphere annually. And it also may offer additional environmental benefits.

Phytoplankton are microscopic algae that live near the ocean surface and use photosynthesis to convert carbon dioxide into food. Every year phytoplankton production removes about 50 billion tons of atmospheric carbon. However, most of that carbon is converted back to carbon dioxide by the actions of marine viruses, bacteria, zooplankton, and other larger animals.

Sharma’s idea is to use clay minerals to reduce the efficiency with which carbon is oxidized near the ocean surface by speedily burying it to great depths. After hitting the water, the minerals, which are dense, charged, and have large surface area, would pick up organic material and then fall quickly to depths low enough to take the carbon out of circulation with the atmosphere. Depending on which minerals are used, the process might also create material that zooplankton mistake for food and then excrete. Transformation of clay minerals in the zooplankton’s guts would release nutrients for phytoplankton. Increasing phytoplankton productivity would further reduce the amount of atmospheric carbon dioxide. The association of clay minerals with zooplankton fecal pellets would again make the atmospheric carbon sink rapidly to great depths in the ocean.

The research will begin with “baby steps,” including laboratory testing to figure out the best “concoction” of clay minerals to use, and then continue with small-scale experiments in the ocean, eventually building up to a larger scale, which would require tens of millions of dollars, Sharma says.

But Sharma is optimistic. His early predictions have proven correct, and he and his team are working to ensure that the process would have no unintended negative consequences. One of Sharma’s students and a colleague tested a combination of minerals Sharma came up with and found it did not affect Prochlorococcus, the most abundant photosynthetic organism in the world.

“That’s a very good thing,” Sharma says. “Obviously, the first thing is do no harm.”

Carl Renshaw, chair of the Department of Earth Sciences, says, “Mukul is an exceptionally creative scientist with a remarkably broad range of interests and expertise, spanning the early evolution of the earth and solar system to methods to reduce environmental contamination during hydraulic fracturing. Mukul’s project on a novel approach to sequestering atmospheric CO2 is exactly the kind of inventive and impactful research that has defined his career. It is wonderful and gratifying to see his scholarship be recognized with this impressive award.”

Dartmouth faculty who have recently received Guggenheim fellowships include Michelle Warren, a professor of comparative literature; Sienna Craig, an associate professor of anthropology; and choreographer John Heginbotham, a lecturer in theater and director of the Dartmouth Dance Ensemble, in 2018; and composer Ashley Fure, an assistant professor of music, in 2017.