A member of the Class of 2010 has a few words of advice to the 37 Dartmouth graduates who are among Teach For America’s newest recruits: Stop putting yourself first.

Dartmouth graduates and Teach For America

More than 120 Dartmouth graduates have signed on with Teach For America since 2005. They have served in under-resourced school districts all over the United States, from Hawaii to Greater Newark, N.J., and also in Baltimore, Chicago, the Mississippi Delta region, Rio Grande Valley, Las Vegas, and Washington, D.C.

Here’s a look at the numbers of Dartmouth TFA teachers over the years.

Osei-Bobie and TFA Founder and President Wendy Kopp spoke on June 10 at a gathering for the 37 Dartmouth graduates who have been accepted for two-year TFA teaching stints in poor and under-resourced school districts across the nation. The graduates’ family members were also invited to the event.

Kopp, who delivered Dartmouth’s Commencement address earlier in the day, told family members of the soon-to-be teachers, “Your kids are exceptional.”

“It’s a very, very rare person who is actually ready to take on this challenge,” she said, adding words of advice for the new graduates. As teachers, “You’re going to walk the line between confidence and humility.”

Family members were proud—and a bit apprehensive— about their children’s futures at the head of the classroom.

While he’s heard extremely positive reviews of the TFA experience, Kent Godfrey of Lafayette, Calif., said he and his wife—a teacher— are having a hard time picturing their daughter, Caroline Godfrey ’12, in the struggling Oakland, Calif., school where she’ll teach high school chemistry come fall.

“It’s something she’s really excited about. But it’s almost hard to imagine a 22-year-old biology major going into this type of a classroom,” he said, adding, “It’ll be a good introduction to the real world.” 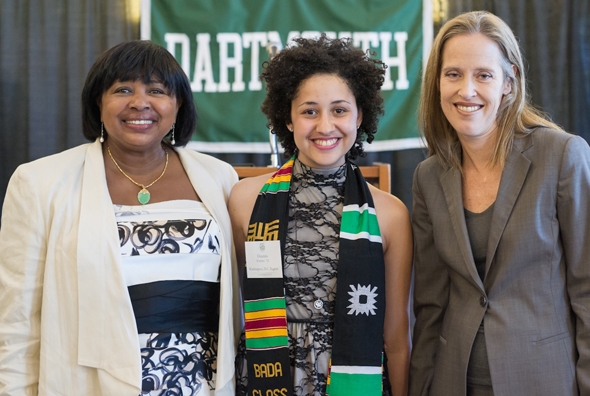 Deanna Portero’s mom, Ella Portero of Queens, N.Y., expects her daughter will “discover things that we don’t see” in the Washington, D.C., school where she’ll teach. “She’s passionate about change and this is a phenomenal opportunity,” Ella Portero said.

Geraldine Cramer, a retired teacher, had some words of advice for grandson Travis Cramer ’12 of Portland, Ore., who will be teaching in a Philadelphia grade school. “Look at your children and see what they need,” she said.

Dartmouth Board of Trustees Chair Stephen Mandel ’78, who also sits on TFA’s board of directors, introduced Kopp and called her a visionary leader and innovator.

“TFA is building the human capital pipeline that is going to fix our education system in this country, and ultimately fix this country. And it’s all due to the initiative, perseverance, and leadership of Wendy Kopp,” said Mandel.

Another lesson in perseverance is Osei-Bobie. The young teacher is going back for a third year at Orchard Gardens Pilot School in Roxbury, Mass., which during her two TFA years there has gone from being one of Boston’s 12 poorest-performing schools to a turnaround success. This time she’ll be the team leader of her fourth-grade teaching colleagues.

After graduating from Dartmouth in 2010, Osei-Bobie’s family members, who came to this country from Ghana and made great sacrifices to see her through Dartmouth, asked her to do anything but become a teacher. It was a request she couldn’t grant.

“This is still much harder than I anticipated,” she says of her classroom duties, counting the days until the end of the Orchard Gardens school year. “I am eager for my school year to end, just so the next one can begin.”