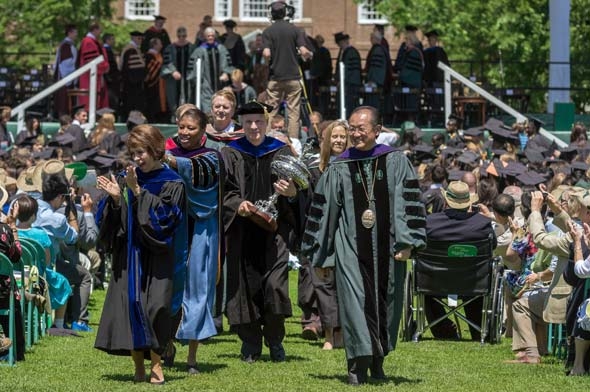 Kim, who leaves Dartmouth after three years to become president of the World Bank on July 1, one last time implored students—as he often has—to take on the world’s troubles.

“Courage to tackle the most difficult problems and venture into uncharted territory is critical for any institution, and it’s also critical for you. In so many institutions, fear and mediocrity track along the same well-worn paths. Avoid those paths at all cost,” he said.

“Don’t be too precious. Be clear, say what you mean, and try to speak so that you can be understood by any person of goodwill. Please know that you have all received one of the greatest educations available to humankind. So despite your ability to dive into the esoteric, you now have an enormous responsibility to make yourself understandable to the diverse and interconnected world into which you are graduating. That will take work. Don’t hide behind your elite education—make it work for you and especially make it work for others,” said Kim.

Kim’s valedictory address to students, who following tradition receive the words while standing, came at the end of a three-hour ceremony on a sunny, warm day that included the presentation of seven honorary degrees—two of which were a surprise—and a Commencement speech by Teach For America founder Wendy Kopp.

Kim and his wife Younsook Lim, who like her husband is a physician, were presented with the surprise honorary degrees. In bestowing Lim’s honor, Board of Trustees Chair Stephen Mandel Jr. called her “an insightful, committed, and dedicated pediatrician. Your generous heart and distinctive intelligence will be missed by the entire Dartmouth community.”

In awarding Kim’s degree, Mandel called the president an “inspired and unafraid” leader.

“From your first day you faced daunting challenges and difficult choices,” said Mandel. “We will miss your extraordinary leadership and your humanity.”

In her address, Kopp told students that the world is enriched by “the vital role of the people who said ‘yes’ when most others said ‘no.’ ”

“You don’t have to create the next Google to be a builder and make an impact. Each and every one of us can make daily choices to build things up rather than tear them down,” said Kopp.

Wills Begor of Wilton, Conn., told his classmates to “constantly learn, and constantly try new things. Even though you are graduating from Dartmouth, your education is really only beginning. Learn a foreign language, learn to write computer code, go to a graduate school, read a book, or take on additional responsibility at work. Luck is simply what happens when preparation meets opportunity.”

Kearney said learning that it is okay to change your mind led the double major in math and economics to the realization that she could also minor in studio art, “something I never would have done had my initial idea of what my college experience would be like panned out exactly as I had planned.”

David Rogg of East Greenwich, R.I., encouraged the graduates to “be present. Embrace the present because it only happens once and we might miss it if we’re not paying attention. We should enjoy life as we live it as opposed to living through a series of recollections.”

And valedictorian Jie Zhong of Shanghai, China, said that youth is “the most beautiful stage in life.”

“It is a nature of exploration, an eagerness of imagination, a vigor of emotion. It’s a freshness of the deep springs of life. Youth means a growing predominance of courage over timidity, an appetite for adventure over a life of ease, an unlimited desire to conquer the unknown world yet remaining humble. No one grows old by merely living a number of years; people grow old by deserting their ideals,” he said.

Dartmouth awarded bachelors, masters, and doctoral degrees from its undergraduate and graduate arts and sciences programs, Geisel School of Medicine, Thayer School of Engineering, and the Tuck School of Business.

The Commencement ceremony capped a weekend of festivities on campus that included the Baccalaureate multifaith service for graduates and their guests on Saturday, featuring an address by the Rev. Serene Jones, president of Union Theological Seminary, and a speech at the Geisel School of Medicine by Paul Farmer, the physician who, along with Kim, founded the global health nonprofit Partners In Health.

Members of Roth’s class, the Class of 1962, who are celebrating their 50th reunion, were recognized by Kim during Commencement. The returning classmates led the Commencement procession to begin the ceremony, marching onto the Green to extended applause from the large audience.