Read the full story by Anna Fiorentino, originally published in the summer 2012 issue of Dartmouth Engineer.

It’s not only Dartmouth students who receive a Thayer School of Engineering-inspired education. Alumni who teach at universities throughout the country bring their Thayer experiences into their own classrooms and labs. Dartmouth Engineer asked eight alumni in academe about their research, Thayer influences, and how to encourage more people to become engineers. 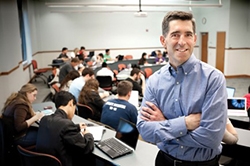 Timothy Weihs ’83, Thayer ’85, spoke with Dartmouth Engineer about the influence his experience at the Thayer School of Engineering has had on his research and his teaching. (photo courtesy of Dartmouth Engineer)

Timothy Weihs ’83, Thayer ’85, is a professor of materials science and engineering at the Whiting School of Engineering at Johns Hopkins University. He told Dartmouth Engineer, “Thayer gave me a broad education that has served me well, especially as I’ve entered areas beyond my current research. The breadth of education that I received at Thayer has been especially useful as engineering research becomes more interdisciplinary. Through a role I play here at Johns Hopkins, as director of the Center for Leadership Education, I’ve been in contact with Professor Robert Graves about our new program similar to Thayer’s M.E.M. program. I also serve on the Bachelor of Engineering External Advisory Committee at Thayer, and it’s been inspirational.”

The story also features interviews with: