Former Deputy Secretary of Defense Is Next Leading Voices Speaker

William Lynn III ’76, former Deputy Secretary of Defense, will speak August 9 as part of the Leading Voices in U.S. Foreign Policy lecture series. The talk, free and open to the public, will begin in the Hopkins Center’s Moore Theater at 4 p.m. 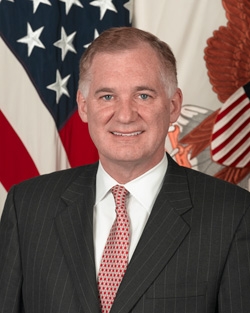 William Lynn III ’76 served as deputy secretary of defense under secretaries Robert Gates and Leon Panetta, in charge of 3 million employees and a $700 billion budget.

Lynn is one of six speakers in the current series, which includes a global health leader, a Pulitzer-prize winning journalist, a distinguished Navy Admiral, a climate change diplomat, and a noted economist.

The series supplements a government class for sophomores, who spend the summer term on campus. The course, “America and the World: Contemporary Issues in U.S. Foreign Policy,” is taught by Benjamin Valentino, associate professor of government. Each week, a faculty member leads the class, giving an introductory lecture to prepare students for the address by the visiting presenter, who speaks to the class and the public later in the week.

“William Lynn has devoted his career, both in public service and in the private sector, to issues of American national security,” says Valentino. “Lynn will help our students understand the changing threats to America’s security and the role of the U.S. military in responding to those threats.”

Lynn is chief executive officer of DRS Technologies, Inc., a supplier of products, services, and other support to military forces. Lynn came to DRS, based in Parsippany, N.J., in 2012, after serving as deputy secretary of defense under Secretaries Robert Gates and Leon Panetta. As deputy secretary, Lynn managed an annual budget of $700 billion and three million employees while leading departmental efforts in cybersecurity, space strategy, and energy policy.

Lynn has also worked as senior vice president of Government Operations and Strategy at the Raytheon Company, director of program analysis and evaluation in the Office of the Secretary of Defense, and on the staff of Senator Ted Kennedy (D-Mass.) as counsel for the Senate Armed Services committee.

Lynn has been recognized for professional and service contributions. He has been honored by the Army, Navy, and Air Force, and received four Department of Defense medals for distinguished public service and the Joint Distinguished Civilian Service Award from the Chairman of the Joint Chiefs of Staff.