A Dartmouth delegation, led by President Carol Folt, has just completed a three-country set of visits to Asia. It began in Beijing, with events to commemorate a pioneering three-decade partnership with a Chinese university, and was followed by visits of delegates to other schools in China, Japan, and Korea to extend international university collaborations. Members of the delegation also met with alumni in the Asian countries and with numerous Dartmouth students studying and working abroad. 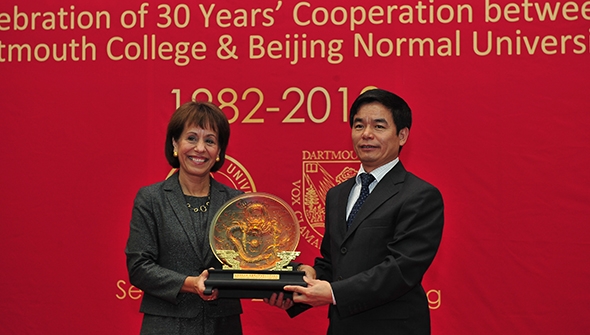 The Beijing leg of the weeklong trip, in the works for two years, began as an invitation from the President of Beijing Normal University to the President of Dartmouth to come together to celebrate the Dartmouth-Beijing Normal University 30-year partnership, the first and longest uninterrupted such venture between any individual Chinese and American universities. As part of the celebration, Folt was awarded an honorary professorship by BNU, and she delivered a lecture on “The Importance of International Exchanges for Dartmouth College and for Higher Education in America.”

“The individuals from both institutions who put this partnership in place three decades ago were pioneers. They realized how important this connection would be for our institutions and students, and how important international exchanges would be to accomplishing our roles for higher education,” Folt said in her speech.

“We see this as a special moment in time—moved by winds of profound and lasting change. The greatest challenges, as well as the greatest opportunities, of the coming decade will require the efforts of educated, globally aware, culturally knowledgeable, and technologically skilled partners from across the world. This conviction is a driving force in our strategy for educating our students for the future,” she added.

Folt told Dartmouth’s Chinese partners that “Dartmouth has a number of goals for internationalization that will strengthen further the international perspective of our educational and research programs,” referring to Dartmouth’s strategic planning process. “Our commitment to the liberal arts is completely tied to our commitment to furthering global partnerships and understanding.”

Mastanduno, Higgins, and Xing Wen, the Robert and Barbara Black Professor in Asian Studies, spent a morning at Tsinghua University in Beijing, where they met with Vice President Xie Weihe and Director of Humanities and Social Sciences Dr. Su Jun. They also met with Professor of History Xueqin Li, who invited them to visit the Research and Conservation Center for Excavated Texts, where they viewed inscribed bamboo slips dating to the 4th century BCE. These recently discovered texts are revolutionizing scholars’ understanding of ancient Chinese classics of literature, government, philosophy, and history.

Next fall, Dartmouth and Tsinghua will co-sponsor the “International Conference on Recently Discovered Bamboo-Slip Manuscripts in the Collection of Tsinghua University.” The event will take place at Dartmouth.

In Japan, members of the Dartmouth delegation met with the presidents of Kanda University and Keio University; both institutions are located outside Tokyo. Faculty members also made connections with a number of university leaders in Korea.

“The time spent in Beijing, Tokyo, and Seoul was very productive in identifying ways to build upon existing partnerships and to develop new ones,” said Whaley. “We were given a wonderful, generous welcome by our hosts in every place, and look forward to strengthening ties in the future.”

Higgins, the Edward Tuck Professor of the French Language and Literature, said: “It was heartening to meet so many alums living and working in Asia whose lives have been transformed by study abroad programs.”

“Our programs in Beijing and elsewhere stand out in the field of study-abroad opportunities, because Dartmouth maintains longstanding partnerships with schools and teachers all over the world. This means there is long-term personal investment on both sides. Our students become part of a community,” she added. 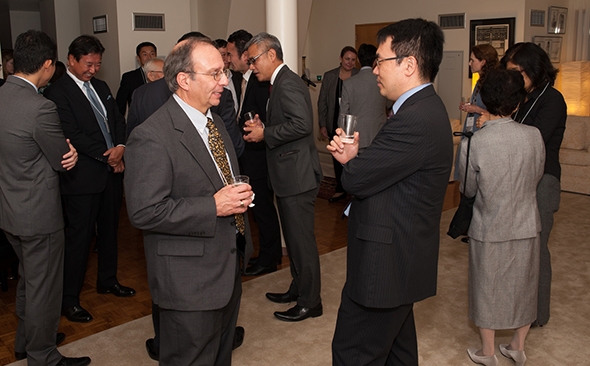 That’s certainly been the case for Dartmouth student Max Samuels ’15, who is participating in a language study abroad program at BNU. “I’m having an amazing time immersing myself in both the language and the culture. I can’t wait to see what the rest of the term brings,” he said.

The Dartmouth group met with a number of alumni and with current Dartmouth students enrolled in study abroad programs in the three countries. At BNU, Mastanduno hosted a reception in honor of Dartmouth alumni. Folt asked a number of alumni for their ideas on increasing Dartmouth’s global connections and collaborations.

“It was an honor and a pleasure to have President Folt visit Japan. The Dartmouth Japan alumni look forward to deeper ties with Hanover in the coming years,” said Gen Kanai ’95, a member of the Dartmouth Alumni Club of Japan.

Xing said Dartmouth’s Beijing foreign study program “provides students with an opportunity to better study Chinese language and culture, and with an important alternative perspective to look at the world, their own culture, and life. President Folt’s visit to BNU emphasizes the importance of both the remarkable collaboration between the two universities and the Beijing FSP to a Dartmouth student.”

One of the first Dartmouth students to study at BNU in 1982, the year the partnership was created, was Timothy Geithner ’83, then an Asian studies major and today the U.S. Treasury Secretary. Four years later, another Asian studies major— and now Sen. Kirsten Gillibrand ’88 (D-N.Y.)—studied at BNU.

“We knew at the time that we were breaking new ground. But even so, we could hardly have imagined how much the world—and our world of university education—would change in the intervening three decades,” said Folt. “We were one of the first Ivy League schools to offer study abroad programs and they’ve proven to be one of Dartmouth’s signature offerings, with two-thirds of our undergraduates taking part in foreign study.”

The BNU partnership is one of a number of Dartmouth connections with China. In April, officials from China’s Ministry of Health and Dartmouth announced a plan to support the advancement of health care delivery and services in China.

In Japan, the Dartmouth group met with officials from Mitsui & Co., Ltd. The Tokyo-based trading, investment, and service company a year ago endowed a Dartmouth professorship in Japanese studies.

“This professorship was instrumental in Dartmouth’s ability to recruit Professor Yusaku Horiuchi, an expert in Japanese politics, to Dartmouth. He has begun work at Dartmouth this term as the inaugural Mitsui Professor, and we are delighted to have such an exceptional scholar and teacher as a member of our faculty,” said Mastanduno.

Dartmouth’s relationship with Mitsui dates back a century, when Takanaga Mitsui, Class of 1915, took ill and was aided by then-Dartmouth President Ernest Fox Nichols. Two of Takanaga Mitsui’s sons would graduate from Dartmouth—in 1943 and 1958. Also in the 1950s, the Mitsui Company began a tradition of sending employees to Dartmouth to study. More recently, Mitsui has sent employees to programs at Dartmouth’s Tuck School of Business.

Those making the recent trip to Asia represent a fraction of Dartmouth’s faculty involved in significant worldwide engagement. With 40 study-abroad programs in two dozen countries and six continents, each year 60 percent of Dartmouth’s students study abroad, placing the institution among the top 10 universities in the nation for foreign study. Moreover, a very high fraction of Dartmouth faculty from all schools are deeply involved in global, transnational research, and travel abroad every year for conferences and other scholarly activities.

In addition, Dartmouth deans and faculty on both the undergraduate and graduate level are continually creating new partnerships and affiliations around the globe.

The Thayer School of Engineering added its first formal engineering exchange program for undergraduates at Thailand’s Chulalongkorn University, in Bangkok, in 2008, and another at Chinese University of Hong Kong last year. Thayer is currently working on a third such partnership for this year to “develop its strategic focus on Asia and provide a range of international academic opportunities,” said Dean Joseph Helble.

In addition to its China partnership, the Geisel School of Medicine also has global health programs in Tanzania, Rwanda, Peru, Kosovo, and in underserved areas of the United States. Geisel is one of seven U.S. medical schools chosen by USAID and partnering with the Ministry of Health in Rwanda to support the government there in building a new high quality, sustainable health system.

In September, Tuck School of Business Dean Paul Danos traveled to Lima, Peru, and Sao Paolo, Brazil, to meet with prospective students, alumni, members of the media, and academic partners. Later this fall, he heads to Paris for the first Council on Business and Society annual forum. The Council is a partnership of five international business schools—Tuck, ESSEC Business School in France; Keio Business School in Japan; School of Management at Fudan University in China; and the University of Mannheim Business School in Germany– brought together to marshal their intellectual and professional resources in the pursuit of knowledge and ideas that will make an impact both in the world of management education and in daily life.