The Business of Climate Change

For the third time, finance professor Anant Sundaram is leading a group of students to the United Nations Climate Change Conference. This year’s conference, COP18, is taking place in Doha, Qatar, from November 26 through December 7, and it’s one more chance for countries to discuss how they can reduce carbon dioxide emissions and prevent the catastrophic effects of climate change. 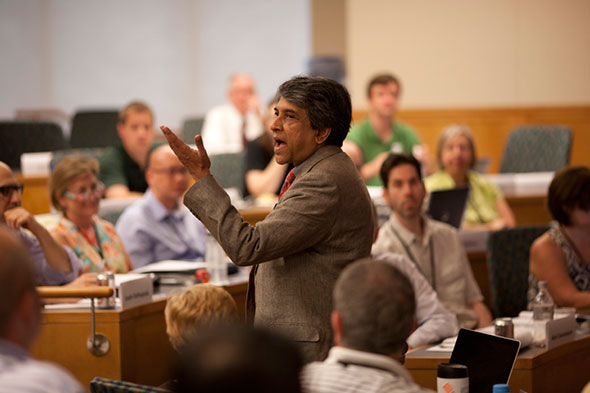 Anant Sundaram, a visiting professor of business administration at the Tuck School of Business, is leading a panel discussion at the United Nations Climate Change Conference entitled “The Role of Global Corporations in Moving the Climate Needle.” (Photo by Mark Washburn)

The delegation from the United States may have a stronger incentive to participate constructively this year, as 2012 has brought no shortage of extreme weather to North America, from droughts and wildfires to Hurricane Sandy—an event so large and unprecedented that the media dubbed it a “superstorm.” On the day Sandy hit, a 13-foot surge of water inundated parts of Manhattan, flooding tunnels and subways, and forcing the stock exchanges on Wall Street to close for two days. When the water receded, the storm’s toll was worse than anyone expected: 110 people dead and close to $50 billion in damages.

Aside from its frightful power and size, Sandy was significant because it heightened the national conversation about the connection between climate change and extreme weather. As it became clearer that the combination of warmer ocean temperatures in the North Atlantic and melting ice in the Artic conspired to pack Sandy with more energy, “global warming” was being muttered at the kitchen table and the water cooler alike.

But even before Sandy, climate change and carbon dioxide emissions have been topics of steady concern in corporate board rooms and CEO suites, says Sundaram, who teaches the “Business and Climate Change” elective at Tuck, perhaps the first course of its kind in an MBA curriculum. That’s a major reason behind the trip to COP18, where Sundaram is organizing a panel discussion entitled “The Role of Global Corporations in Moving the Climate Needle.” “At this point, there’s a massive amount of resources, talent, money, and R&D that companies are devoting to understanding climate change and how to mitigate their own carbon footprints,” Sundaram reports.

Tuck is the only business school attending COP18, and the group is blogging about their experiences and reflections (https://tuckcop18.wordpress.com/).