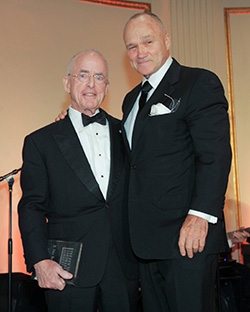 “Living Landmarks preserve New York City in their own special ways. John Rosenwald’s prodigious fundraising skills and personal generosity have helped preserve an array of vital cultural, educational, and civic institutions. He does this with grace and charm. And he epitomizes the best New Yorker,” said Conservancy President Peg Breen.

The Conservancy provides financial and technical support for preservation projects in New York, and since 1973 has loaned and granted more than $36 million to help people save their homes and their cultural, civic, and religious institutions.

“When I look at the list of prior recipients of this wonderful award, I think that my father would have liked this, and my mother would have believed it,” Rosenwald said. He was introduced at the gala by New York City Police Commissioner Ray Kelly.

In addition to his philanthropy in the city, Rosenwald’s generosity has for many decades included his alma mater.

“John, or ‘Rosie’ as he is known to many, may have done more for Dartmouth than any other living alumnus, through his leadership, vision, humor, and personal generosity. We are blessed to count him as a son of Dartmouth,” says Dartmouth Board of Trustees Chair Steve Mandel ’78.

Rosenwald served as a member of Dartmouth’s Board of Trustees from 1986 to 1996, chairing the board from 1993 to 1996. He was a vice chair of the Campaign for the Dartmouth Experience, Dartmouth’s last fundraising campaign, which ended in 2010, and also chaired the previous campaign, the Will to Excel.

Among the many gifts Rosenwald and his wife, Pat, have given Dartmouth are two endowed scholarship funds, one for undergraduates and one for Tuck School students, funding for an organic chemistry lab in Burke Laboratory, and the Rosenwald Classroom, an auditorium in Byrne Hall at the Tuck School of Business. In 2002, Rosenwald received an honorary degree from Dartmouth.

In 2000, The New York Times wrote that Rosenwald possessed “a knack for getting others to give away their money, often in prodigious amounts.” In that profile, the Times calculated that he had helped raise a total of $2.3 billion for NYU Langone Medical Center, the Central Park Conservancy, the Metropolitan Museum of Art, Deerfield Academy, and Dartmouth.

What’s the figure a decade later? It’s up to $3 billion, says Rosenwald.