Dartmouth Admits 464 Early Decision Applicants to the Class of 2017

Dartmouth has admitted 464 students to next year’s entering Class of 2017 from a pool of 1,574 early decision applicants. The prospective students were notified December 6 via a secure website. 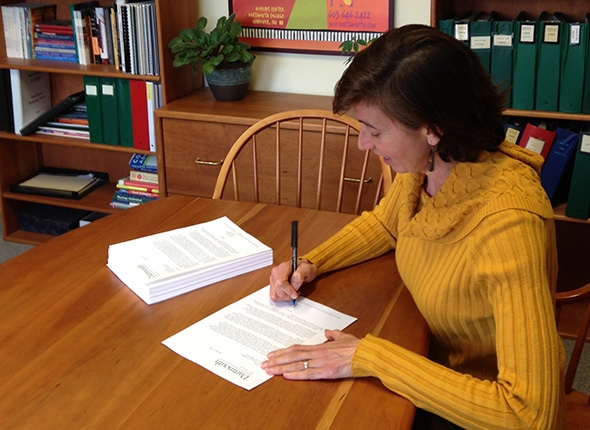 “The students admitted in early decision are an exceptionally accomplished and passionate group of students,” says Maria Laskaris ’84, dean of admissions and financial aid. “They have made notable contributions to their schools and communities both in and out of the classroom, and I know that their many interests, backgrounds, talents, and perspectives will greatly enhance the Dartmouth experience for our community.”

By applying through the early decision program, the applicants made Dartmouth their No. 1 choice over all other institutions and agreed to attend if admitted.

Social media outlets were ablaze with comments from admitted students following the notifications, including at least one member of the Class of 2017 who was quick to get in touch with a Dartmouth professor. The student, who lives in Wales, reached out to Dartmouth’s David Blanchflower, the Bruce V. Rauner Professor of Economics, who is a British and an American citizen and attended the University of Wales.

“As a (and perhaps the only) Welsh member of the Dartmouth Class of 2017,” said Jennifer Evans via Twitter, “I can’t wait to meet you next year!”

To which Blanchflower replied, “Nice to meet you & welcome to the Dartmouth Class of 2017.”

Thomas Cormen, professor and chair of computer science, was quick to extend his congratulations to admitted students.

“Looking forward to meeting you in the fall. Come take Computer Science 1!” he tweeted. 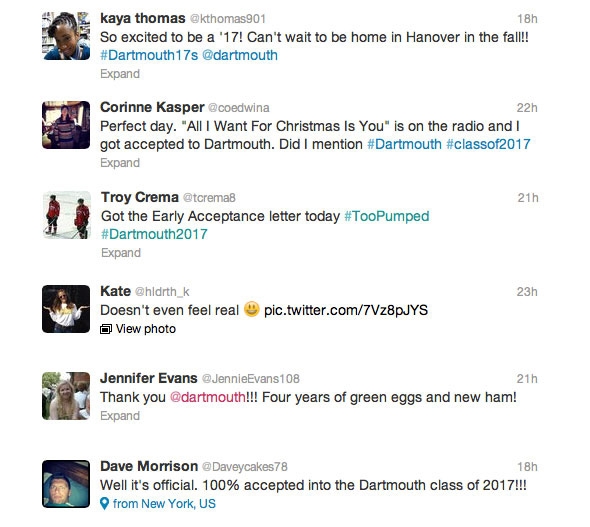 Dartmouth is in its third year of partnering with QuestBridge, an organization that matches exceptionally talented low-income students with colleges and universities across the country, and this year’s early decision group includes a number of QuestBridge National College Match finalists.

The early decision group will comprise about 40 percent of the overall class.

The deadline for Dartmouth’s regular decision admissions applications is January 1, 2013.