Dartmouth has admitted 469 students to next year’s entering Class of 2018 from a pool of 1,678 early decision applicants. The prospective students were notified today, December 11, via a secure website.

The number of early decision applications increased by more than 6 percent from last year. 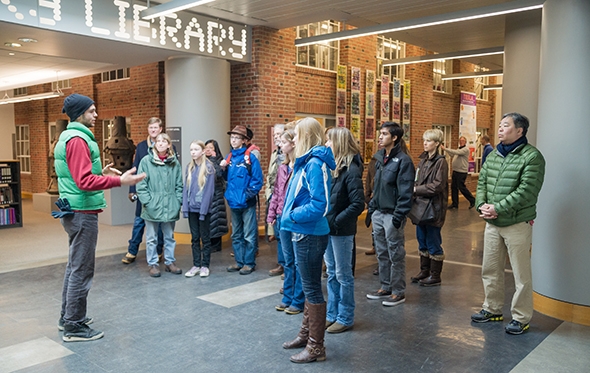 “Of course we were pleased to see the growth in the size of the early decision pool,” says Maria Laskaris ’84, dean of admissions and financial aid. “More importantly, however, was our sense of the qualitative strength of this year’s early decision applicants—characteristics that go well beyond the tangible measure of academic achievement.”

Because many applicants will be logging on at the same time to check the status of their applications, it is vital that they are able to get on the website and get correct information regarding their admission and financial aid decisions.

To make sure the secure website works correctly, the Office of Admissions works with the Administrative Computing team and with computer network administrators.

Tom Joseph, senior programmer and analyst at Dartmouth, says the offices collaborate by reviewing an extensive checklist of tasks and running tests to recreate the conditions present when the decisions are released. It helps that the team “has a healthy dose of paranoia,” he jokes.

“Database and network administrators run stress tests on the system to ensure the infrastructure can handle the increased activity when thousands of applicants are logging on to check their admissions decisions,” he says.

Maria Laskaris ’84, dean of admissions and financial aid, says Joseph and the entire Banner Student team provide vital assistance at one of the most critical points in the admissions calendar.

“Tom has been a really great partner,” she says. “In the days leading up to the decision notification date, he will do a lot of important things that nobody sees.”

The early decision group will make up about 40 percent of the overall class.

Among the admitted students, the mean SAT score was 2156 and the mean ACT score was 32.1. Among students who attend schools that report rank, 31 percent are ranked first in their class and 94 percent are ranked in the top 10 percent. The mean ACT score of accepted students is in the 98th percentile, and the average SAT score placed in the 97th percentile.

By applying through the early decision program, the applicants made Dartmouth their first choice over all other institutions and agreed to attend if admitted.

This year marked the fourth year that Dartmouth has partnered with QuestBridge, an organization that matches exceptionally talented low-income students with colleges and universities across the country. Dartmouth has also made connections with other organizations that reach students who may not otherwise apply to selective institutions, Laskaris says.

Last month, the White House announced a new initiative that seeks to increase the number of low-income students who pursue a college degree. Dartmouth has not only increased its admissions outreach efforts but has remained steadfast in its commitment to providing vital financial aid through its need-based program, and giving students the resources, such as the First Year Student Enrichment Program, to help ensure their success, adds Laskaris.

“Dartmouth’s partnerships with a variety of organizations devoted to increasing college access, whether at the national level or at the grassroots level, have become one of the cornerstone of our outreach efforts,” says Laskaris. “We know that the simple lack of access to information for students in low-income schools and communities—particularly regarding the strong need-based financial aid offered by the most well-endowed institutions—as well as the lack of adult or peer mentorship, are among the surmountable barriers facing these young people.”

Dartmouth offers free tuition and no-loan financial aid awards to students from families with incomes below $100,000.