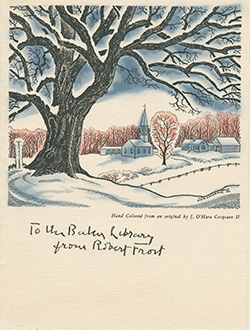 A 1942 card that includes the poem “The Gift Outright.” (Image courtesy of Rauner Special Collections Library)

Some individuals—many at Dartmouth, in fact—received these cards from 1934 to 1962. Produced mostly by the boutique printer Spiral Press, the cards—running up to 20 pages in length—included such well-known Frost poems as “The Gift Outright,” “A Cabin in the Clearing,” and “The Wood-Pile.” The press run grew from 775 in 1934 to 17,055 in 1962.

Dartmouth’s Rauner Special Collections Library has an extensive collection of the cards, including copies of the first-ever example—“Christmas Trees”—which was produced without Frost’s knowledge in 1929. Later, Frost expressed admiration for the card and he agreed to help produce them on an annual basis in 1934.

Examples of the cards from the Rauner Special Collections can be viewed here.