Read the full story by Sean Plottner, originally published in the January/February 2013 issue of Dartmouth Alumni Magazine. Plottner is editor of the magazine. 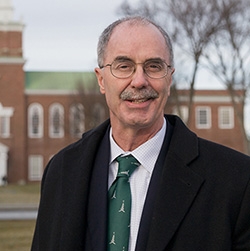 A celebration to welcome President-Elect Philip J. Hanlon ’77 will take place January 11, 2013, at Dartmouth. President-Elect Hanlon will make remarks at the event, which is open to the public, at 3 p.m. in the Hopkins Center’s Spaulding Auditorium. Afterward, there will be a reception from 3:45-5 p.m. in Alumni Hall, where community members can meet Hanlon.

Remote viewing will be available in Cook Auditorium in the Murdough Center at the Tuck School of Business; Filene Auditorium in Moore Hall, and 105 Dartmouth Hall.

Hanlon was named Dartmouth’s 18th president on November 29, 2012, following a unanimous vote by the Board of Trustees. He will take office July 1, 2013.

What does becoming president of Dartmouth mean to you?

I have landed my dream job. I am completely thrilled and can’t wait to get back there and be part of that community again.

Do you know how your name was introduced into the applicant pool?

I knew there was an opening but didn’t think about it as an option until I was contacted by the search firm. I don’t know how my name got put in the hopper.

Were you a candidate when President Jim Wright stepped down?

No, I wasn’t. I was not in a provost position at that point.

What do you feel an alumnus brings to the job that a non-alumnus can’t?