Well-wishers say she “changes the face of Dartmouth.” 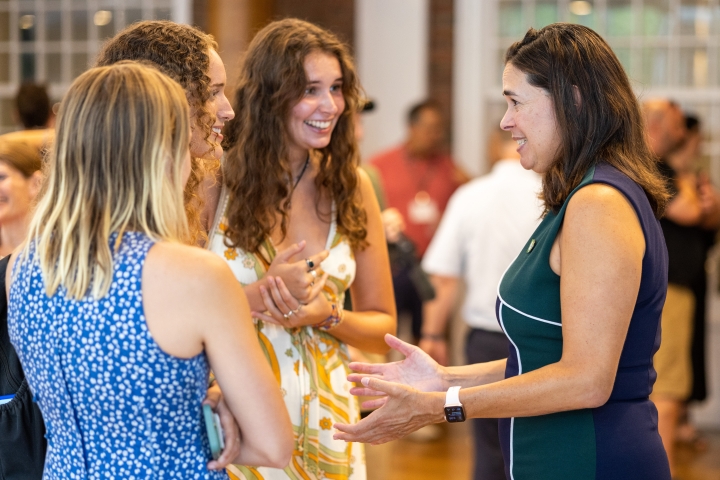 Less than 24 hours after the announcement that Sian Leah Beilock was elected the 19th Dartmouth president in the Wheelock Succession, the Barnard College president was standing on the Green for photographs and video as the early morning fog on Friday burned off above Baker Tower.

“Congratulations,” shouted a pair of bicyclists as they zipped by on East Wheelock Street.

“Thank you,” Beilock shouted back with a big smile.

Beilock, a leading cognitive scientist and former executive vice provost of the University of Chicago, spent the day touring campus, speaking to students, faculty, staff, and alumni, and greeting about 400 people who lined up to chat with, congratulate, and take selfies beside the president-elect at a two-hour afternoon reception in the Hanover Inn.

The first woman to be elected president of Dartmouth in its more than 250-year history, Beilock, who will take office next summer, was met by an outpouring of enthusiasm.

Izzy Cheney ’24 and Evelyn Hatem ’24 spoke to Beilock together after waiting in the line that encircled the Hayward Lounge Friday afternoon.

“I’m so happy that she is bringing the perspective of the cognitive sciences. I’m also a woman in STEM, so I’m especially excited about that,” said Cheney, an anthropology and chemistry major. “I’m really happy that we will have a woman president, and I’m excited that I will have my senior year with her.”

Hatem, an environmental sciences major, also said she is inspired to see a woman take over as Dartmouth’s next president. “I’m excited to hear her articulate what she will bring from Barnard as a liberal arts college and also as a research institution, and I can’t wait to see how this next year unfolds.” 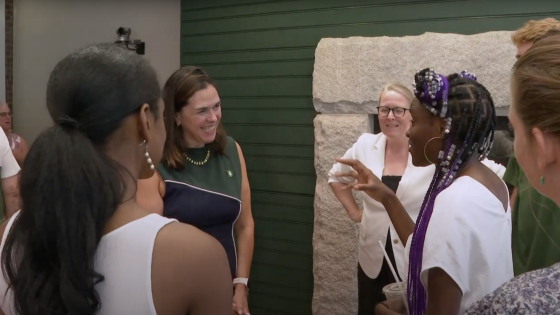 Rohan McFarlane ’93 was on campus with his fiancée Nicole Haig ’95, who is here for her class reunion. They both said they see Beilock’s election as an important moment for Dartmouth.

“She changes the face of Dartmouth. To have a woman, a young woman who brings energy and a level of engagement and inclusion, it’s just taking things to the next level,” Haig said.

“I’m hoping she stays for 25 years,” said McFarlane. He noted that on the 50th anniversary of coeducation and a century after Edward Mitchell’s fight to win acceptance as one of Dartmouth’s first Black students, to see a dynamic young woman take over gives him great optimism for the future of the College.

“It’s like anything else in life, if you just open the door and level the playing field, then you see where we can be,” McFarlane says. “Look in my eyes. I hope you can not just hear it, but feel the optimism.”

“I know Sian from way back. We come from a similar research area, and she has so many different strengths—strengths in science and scholarship, strengths in academic leadership, and strength in the diversity initiatives that she has been promoting,” Wager said. “She’s the whole package.”

And as Wager and a group from psychology and brain sciences spoke with Beilock, she mentioned that she is doing research and still runs a lab at Barnard. 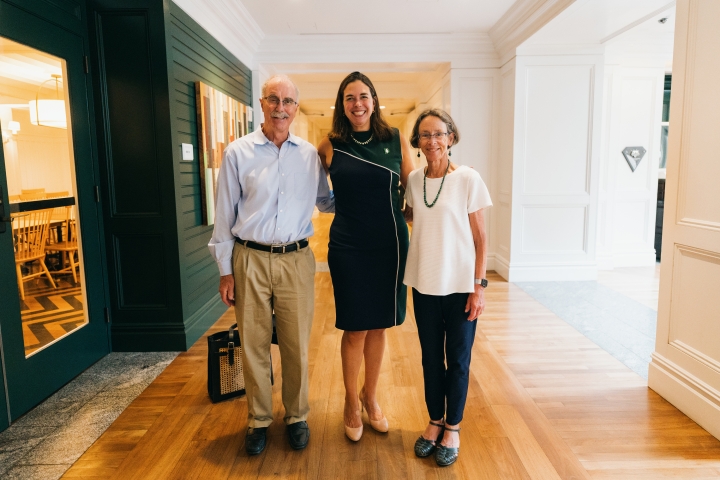 President Philip J. Hanlon ’77 and his wife, Gail Gentes, chatted with Beilock just before she opened the reception line. President Hanlon, who is stepping down next summer after a decade at Dartmouth, says he has known Beilock for several years, in part through their work on the Consortium on Financing Higher Education.

“I think this appointment is incredibly exciting. She is an eminent academic, she has been at a couple of the most outstanding academic institutions in the country, her research is compelling, and I know she’ll be an experienced and vibrant leader for this institution,” Hanlon said. “I’m really looking forward to seeing what happens under her leadership.”

So, too, are many others in Hanover. Josie DeSilva, 11, waited in line with her father, anthropology professor Jeremy DeSilva, to meet the president-elect. “It was so cool to talk to the president of Dartmouth,” said the sixth grader. “It’s awesome that there’s finally going to be a woman president.” 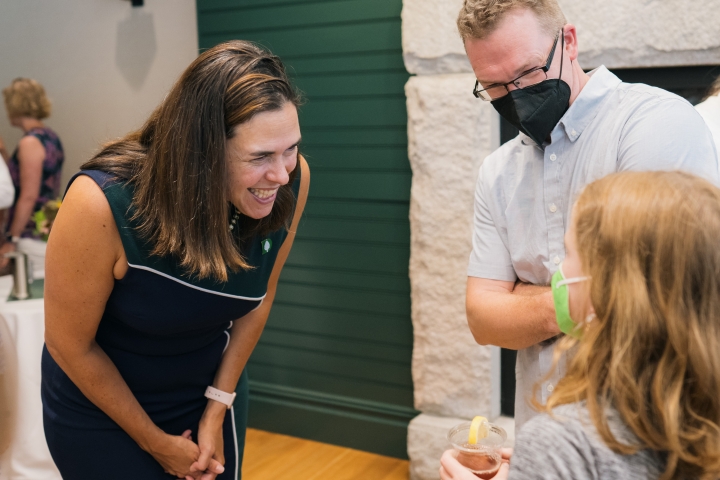 After the Hanover Inn event, Beilock told Dartmouth News, “The reception has just been so amazing, and I’m really excited to be a part of this community and to learn from the students, faculty, staff, and alums. I can’t wait.”

She also received big rounds of applause from members of the Class of 1995 and the Class of 1996 when she dropped in at their reunion tents. Earlier in the day, she visited the president’s house, showing it to her 11-year-old daughter over FaceTime.

Asked if there were any secrets about the house Beilock might want to know about, Hanlon said, “No, but like all New England houses, you’ve got to watch out for a few bats every now and then.” 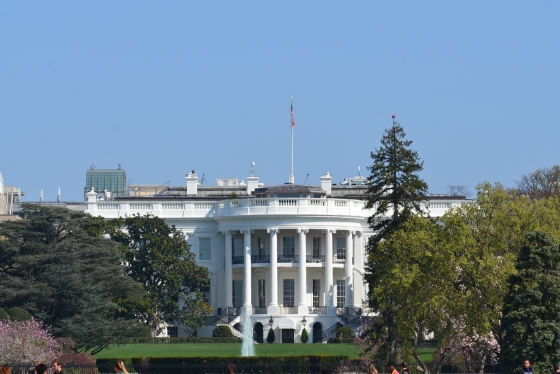 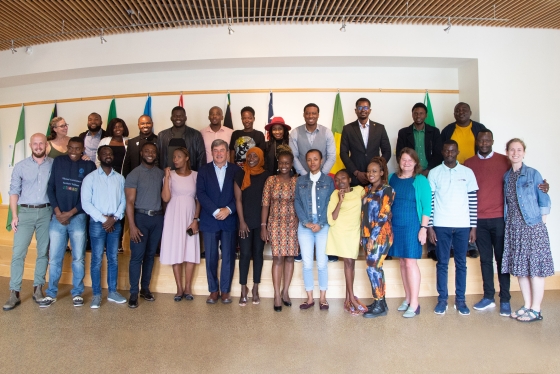