Dozens of Haitian artists, business leaders, health policy experts, and government officials, including a former prime minister, will join the Dartmouth community in discussions next week at the Porter Foundation Symposium, “Haiti and Dartmouth at the Crossroads.”

The goal for the conference is to develop initiatives to assist Haiti, which was devastated by the 2010 earthquake. The three-day symposium features lectures, presentations, working group discussions, and musical performances as Dartmouth and Haiti work together to improve education, health care, and economic development in the Caribbean country. 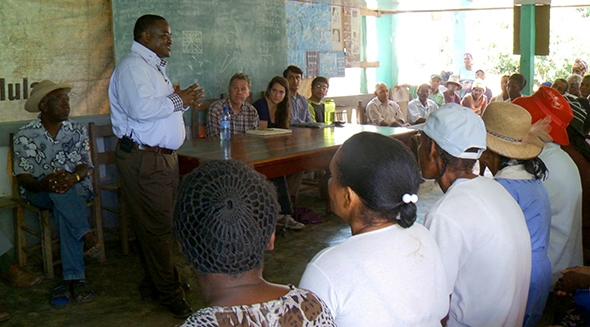 “How can Dartmouth and other academic institutions work to improve conditions in Haiti? I’m very excited about the kinds of proposals to be narrowed down at the meetings,” says Peter Wright, professor of pediatrics at the Geisel School of Medicine.

The symposium will use an interdisciplinary approach, according to Wright, with the participation of students from the Tuck School of Business, Thayer School of Engineering, Geisel School, the Department of Studio Art, and other disciplines.

Government officials attending the event include Michèle Pierre-Louis, who served as Haiti’s prime minister in 2008 and 2009. Wright, an organizer of the conference, says it is crucial that the ideas produced at the symposium be deemed viable and supported by Haiti’s government.

“The goal is to come out of the conference with feasible and detailed projects to help Haiti,” says Studio Art Senior Lecturer Jack Wilson, who has made several trips to Haiti.  “Groups will be working to hammer out the details of proposals of the projects.”

Wilson is one of the Dartmouth faculty members involved in the $300 House project, which works to provide affordable housing to victims of the earthquake. Since the disaster, Dartmouth has sent teams of physicians and health care workers to Haiti.

“Emergency teams going down there proved to be very effective,” says Wright, who first traveled to the country in 1974. “Dartmouth has a capability for working in these situations.”

The goal for the symposium is to continue to help the country recover from the disaster, Wright says, and also to tackle long-term problems that plague Haiti, many of which preceded the earthquake.

Michael Pierre, Tuck ’14, is of Haitian descent. He says the symposium is a great way for Dartmouth students to use their education to address real world issues.

“The opportunity to meet and interact with policymakers, business leaders, and esteemed members of academia to help solve Haiti’s most pressing troubles is a dream come true,” says Pierre.

Here is a list of events that are open to the public: