When Dartmouth was founded on December 13, 1769, its charter created a college “for the education and instruction of Youth of the Indian Tribes in this Land ... and also of English Youth and any others.” But this central tenet of the College’s charter went largely unfilled for 200 years, as Dartmouth counted only 20 Native American students among its graduates prior to 1970. 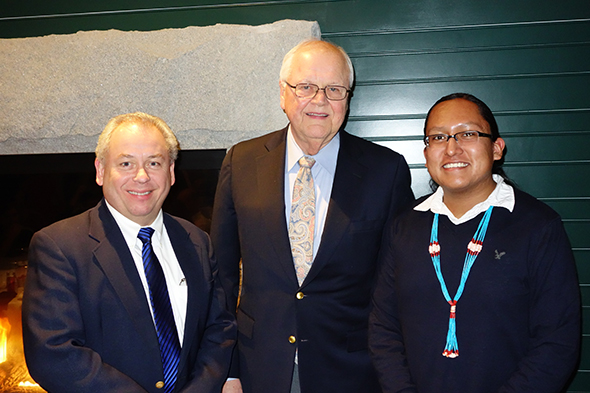 When Dartmouth’s 13th president, John G. Kemeny, took office in March 1970, he vowed to rededicate the institution to this mission. Following a period of recruitment, Dartmouth welcomed 15 Native American students that fall. Also, a group of students voiced the need for an academic program dedicated solely to the study of Native American literature, culture, and history. So a committee, co-chaired by President Emeritus James E. Wright, then an assistant professor of history, was formed to look into the creation of a Native American Studies (NAS) program.

Speaking at a Hanover Inn dinner following the Native American Studies program’s 40th anniversary roundtable discussion on February 5, 2013, Wright said, “Some cynics suggested that asking a very young assistant professor to take this on was a way of killing the program. I determined it wouldn’t be.”

Wright and Bird Bear traveled to several college campuses throughout the Southwest to study their Native American Studies programs. He notes that the students’ request for a NAS program came at a time when Dartmouth was looking for ways to expand its curricular offerings.

“My interest, as a Western historian, was an intellectual and academic one,” Wright says. “I wanted us to include different narratives in the telling of the American story. Some of us younger faculty at the time—our fields were becoming broader and more inclusive—and we were looking at different types of questions.”

Dartmouth’s Ad Hoc Committee on American Indian Studies completed their report on March 30, 1972, and on May 9 the Faculty of Arts and Sciences unanimously voted in favor of the initiative. The program began officially on July 1, 1972, with one half-time professor, NAS founding program director Michael Dorris, and two classes were offered in the fall of 1972.

While the faculty and President Kemeny supported the program from its inception, NAS faced opposition from some alumni and other critics, who expressed concerns about the academic rigor and integrity of the courses offered. According to Duthu, Dorris played an instrumental role in the early years of the program, not as just a faculty member, but as a defender, advocate, and champion of the program’s mission.

“Dorris had the brains, and the energy, and the stamina to create the program and set it on a proper footing, but also to do battle with all the oppositional forces that were already lined up against the creation of these kinds of program,” says Duthu of the renowned author and scholar, who died in 1997. “He wrote letters to respond, challenge, provoke, and fight back to the opposition. He was very courageous, in many ways, and he never hesitated or backed down from those kinds of challenges.”

Thanks to the efforts of that passionate group of students and faculty four decades ago, Dartmouth now boasts one of the most highly regarded undergraduate Native American Studies programs in the nation. Today, there are eight regular faculty members and more than 25 courses are offered, from history and literature to arts of American Indian peoples. Thousands of undergraduate students, from all ethnic backgrounds, have taken NAS courses, and many Native American alumni have gone on to make monumental contributions to American Indian communities in medicine, law, literature, national policy, and other fields.

Wright, who stepped down as president in 2009 and is now the Eleazar Wheelock Professor of History, is pleased to have played a role in bringing the thriving Native American Studies program to Dartmouth. “It was very important for me, and even today, I consider myself vested in and invested in that program,” he says. “I care deeply about it and value it very much. I am delighted to see it doing so well.”