A symposium marks the landmark decision to let Dartmouth remain “a small College.” 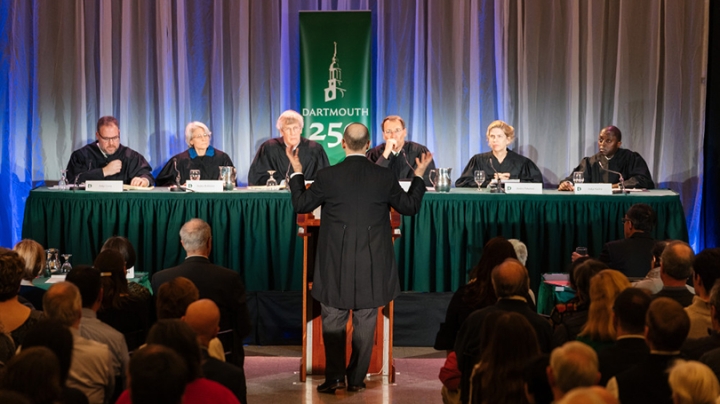 Before a panel of distinguished alumni jurists in Alumni Hall, Gregory Garre ’87 re-argues the Dartmouth College Case at a symposium celebrating the 200th anniversary of the landmark Supreme Court decision. (Photo by Eli Burakian ’00)
3/05/2019
Body

Dartmouth may have been founded by Eleazar Wheelock 250 years ago, but as the plaque in Webster Hall says, it was re-founded 50 years later by Daniel Webster, Class of 1801.

The College marked the occasion with a two-day symposium that brought together nearly 300 students, faculty, alumni, and community members to explore the case’s far-reaching influence on the College and on American legal history.

The case turned on whether the New Hampshire state legislature was justified in nullifying Dartmouth’s Colonial-era charter, a contract that had been made with King George III in 1769. In 1816, the New Hampshire legislature, claiming the College’s educational purpose constituted a public good, briefly turned Dartmouth into a public university—a move Dartmouth ultimately appealed to the U.S. Supreme Court.

“The Dartmouth College Case constitutes the rationale for every Dartmouth alum, when a Dartmouth alum hears the phrase ‘Dartmouth University,’ to shiver with revulsion,” Donald Pease, the Ted and Helen Geisel Third Century Professor in the Humanities and co-chair of the 250th anniversary events, told symposium participants, who obligingly shuddered.

At the Supreme Court, the College was represented by Webster, who later became one of the 19th century’s most powerful statesmen. The landmark ruling in Dartmouth’s favor, handed down in 1819 by Chief Justice John Marshall, established that private corporations have constitutional protections from state interference.

The symposium began with a panel discussion on the historical and legal context of the case, followed by presentations of papers by undergraduates in an interdisciplinary course on Daniel Webster and the case, co-taught by Pease; Russell Muirhead, the Clements Professor of Democracy and Politics; and Robert Bonner, the Kathe Tappe Vernon Professor in Biography.

The symposium also featured panels on constitutional law, the Supreme Court, and the history of the American university. On Saturday, Thomas Burack ’82, this year’s Perkins Bass Distinguished Visitor at the Nelson A. Rockefeller Center for Public Policy, performed Daniel Webster’s peroration—the fiery conclusion of his argument in the case, in which he famously said, “It is, Sir, as I have said, a Small College, and yet, there are those who love it.” (Watch a video of Burack’s performance.) 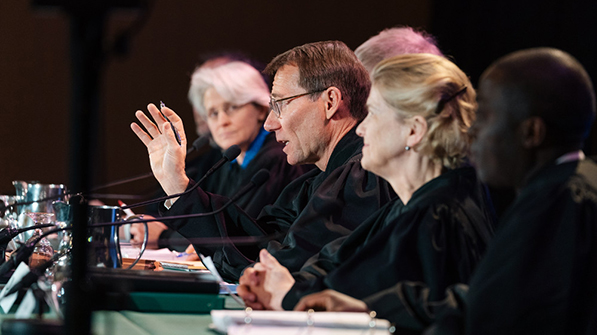 Serving as chief justice on a panel of alumni jurists hearing the re-argument of the Dartmouth College Case, New Hampshire Supreme Court Justice James Bassett ’78 asks for clarification on a point of law. (Photo by Eli Burakian ’00)

Perhaps the most anticipated event was Friday’s reconstruction of the arguments Webster and U.S. Attorney General William Wirt presented before the Supreme Court in 1818.

On Webster’s legal team, arguing on behalf of Dartmouth, was Neal Katyal ’91, former acting solicitor general in the Obama administration. Taking the side of the State of New Hampshire in the role of Wirt: Gregory Garre ’87, former solicitor general under George W. Bush.

Earlier this winter, Katyal and Garre had another opportunity to argue the case in the actual Supreme Court, in Washington, D.C., before Chief Justice John Roberts. The event was attended by Dartmouth trustees, alumni, and administrators, along with Pease, Bonner, Muirhead, and the students in the Daniel Webster course.

Before the arguments began, Kate Stith-Cabranes ’73, the Lafayette S. Foster Professor of Law at Yale Law School, explained why the event would be more reconstruction than reenactment, aside from the fact that no transcripts of the original oral arguments exist: “In that era, the justices did not propound questions to the advocates. This afternoon, however, we will have the modern rules of engagement: a hot bench.”

Burack called the court to order with booming formality. The court’s bias was evident from the start, as Justice Cordy arrived wearing a Dartmouth baseball cap.

At the invitation of Bassett, serving as chief justice, Katyal jumped right into Webster’s argument, asserting the state’s move to control Dartmouth had created an institution “wholly different” from the one Eleazar Wheelock had established in 1769. The justices peppered him with questions, most serious, although there were references to more modern Dartmouth traditions and some good-humored swipes at Harvard, the alma mater of the lower court justice who had originally ruled in New Hampshire’s favor.

When his turn came, Garre made an equally vigorous—and equally good-humored—case for the state. “If I can begin with perhaps the most important issue before the court: the name. Dartmouth University. Dartmouth U. It’s kind of catchy. Imagine avoiding those awkward conversations with family and friends about the difference between a college and a university. It’s not that bad! And much of my friend’s argument goes to the New Hampshire legislature’s sensible determination to move this college into the 19th century by turning it into a university.”

In rendering the court’s opinion, Bassett acknowledged that Garre had an uphill battle. “As you may have noticed, we’ve stacked the court. Despite Mr. Garre’s eloquence, he didn’t really have a chance.” 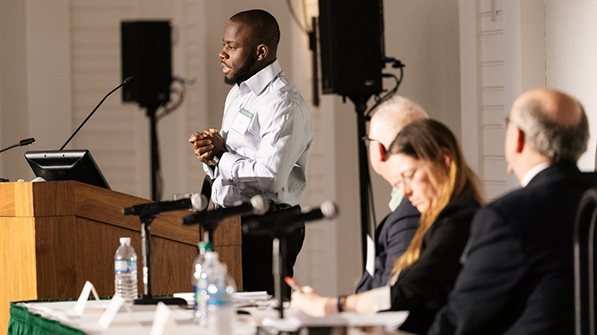 Matt Shearin ’19 presents his paper on the Dartmouth College Case to a panel of alumni legal scholars and participants in the symposium. (Photo by Eli Burakian ’00)

The papers ranged from a discussion of then-Senator Webster’s decision to compromise on the Fugitive Slave Act to a rethinking of the Dartmouth College Case from a state’s rights perspective.

“It was such an honor,” said Margaret Cross ’19, a double major in government and English, about presenting her paper, which compared Webster to another Dartmouth orator, Samson Occom—a member of the Mohegan nation who raised critical early funds for Dartmouth before falling out with founder Eleazar Wheelock over the College’s failure to keep its promise to educate Native American students.

“I’m interested in law, so being able to interact with so many legal scholars has been affirming,” Cross said.

Matt Shearin ’19, a history major from San Diego, argued that Dartmouth’s failure to live up to its original mandate to educate Native students constituted a breach of contract—an issue, he argued, that might have lost Webster the Dartmouth College Case had his opponents raised it. The topic generated impassioned discussion not only from the panel but also from the audience.

“I didn’t know how people would react, but it’s understandable when you disrupt the history or the legend of the institution for people who love Dartmouth, they have feelings about it,” Shearin said. “Understanding the historical context impartially without letting my love for Dartmouth get in the way of my ability to render an unbiased, impartial judgment is something that I learned in this course, and it’s something that I’ll continue to develop moving forward.”

The Dartmouth College Case Symposium was one of nearly two dozen public conferences and symposiums planned in 2019 in celebration of the College’s 250th, or sestercentennial, anniversary.

The yearlong celebration will feature several other special courses in 2019 as well as public symposia on subjects ranging from the College’s founding to coeducation to the future of the liberal arts. To learn more about events, visit the 250th website.

Watch video of Katyal and Garre re-arguing the Dartmouth College Case and of Burack’s performance of Webster’s peroration.