Garre and Neal Katyal ’91 will re-argue the Dartmouth College Case on Friday. 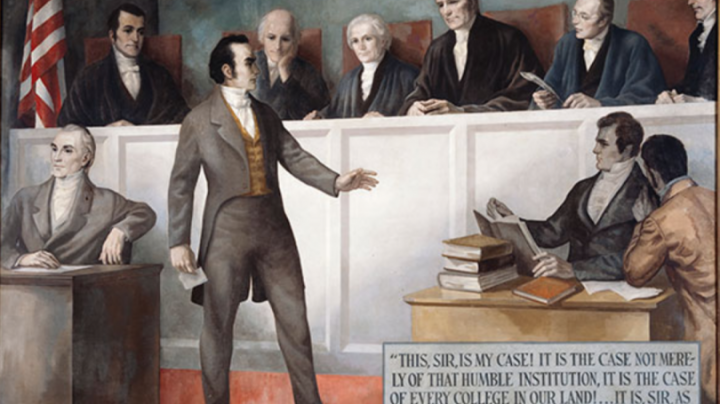 The symposium, which will be held at the Hanover Inn, is one of two dozen academic conferences the College is convening this year as part of its 250th anniversary celebration.

Garre, a partner at the law firm Latham & Watkins, will argue as co-counsel William Wirt against Katyal as Daniel Webster, Class of 1801. Garre recently spoke with Dartmouth News about the famous case.

Dartmouth News: Most Dartmouth students don’t leave Hanover without knowing Daniel Webster’s words: “It is, Sir, as I have said, a Small College, and yet there are those who love it!” We wonder if they know what’s behind that phrase. Did you know, as a Dartmouth student?

Gregory Garre ’87: Certainly not in the sense of the legal argument that Webster was making. Yet Webster’s point was more than legal, and, in that sense, I suspect that he meant it in the way that I thought of it as a student—as an expression of genuine affection for this small but very much beloved, school. Webster was likely trying to appeal to the emotions of the Justices as much as their legal senses. And it worked!

So, what is behind that oft-quoted line and what was the impact 200 years ago of the Trustees of Dartmouth College v. Woodward decision?

We’ll never know if Dartmouth would have lost the case if Webster had not uttered those famous words. But clearly, they had an impact on the justices, who were reportedly brought to tears.

At the time, was the ruling viewed as having consequences or significance beyond Hanover or beyond New Hampshire?

Yes. But Chief Justice Marshall, probably better than anyone else, appreciated the far-reaching consequences of the decision for the economic development of a young America. That was his genius—the ability to see the consequences of a ruling beyond just the particular dispute at hand.

How has the decision been viewed over time? Has it been important since the 1819 ruling? Is it often cited?

The Dartmouth College case is still considered a landmark decision, but its relevance today is more historical and foundational than as a precedent that is routinely invoked by parties in litigation. Although the decision gave force to the Contract Clause of the Constitution and thereby helped fuel the nation’s economic development, the Contract Clause is not a prominent feature of constitutional litigation today.

What does it mean personally for you to be involved in this reenactment, this case conference, at Dartmouth?

It has been a great honor and a thrill to participate in the reenactment. For one thing, it has been a great opportunity to reconnect with Dartmouth in a deeper way than I have since graduating. And for another, it has made me learn—in detail!—this fascinating and critical moment in Dartmouth history and lore. I greatly appreciate the opportunity to be a part of this wonderful event.

Susan J. Boutwell  can be reached at susan.j.boutwell@dartmouth.edu.