Dartmouth College conferred degrees on the Class of 2013 and bestowed on the new graduates a challenge to become the new Greatest Generation.

Under a brilliant spring sky, nearly 1,900 students marched along with faculty, trustees, deans, and honored guests at Commencement exercises on June 9, 2013.

Speaking from the grand podium to some 12,000 people gathered on the Green, Geoffrey Canada, president and chief executive officer of Harlem Children’s Zone, reminded the 2013 graduates that they are receiving degrees from one of the most prestigious schools in the country.

He recalled his own graduation from the Harvard Graduate School of Education after growing up in poverty and despair in the South Bronx. 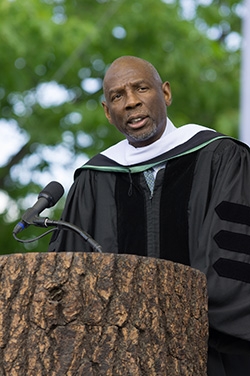 In his Commencement address, Geoffrey Canada told the graduates that they must finish the work and fulfill the promises of those who came before them. (Photo by Eli Burakian ’00)

“I knew right out of college what many people still don’t understand: Countries don’t become great by themselves—it takes heroic sacrifice. Our country was created, molded, and improved by men and women whose moral compass was not moved by the influence of wealth, prestige, and notoriety,” Canada said.

Canada, whose nonprofit supports children in Harlem from birth through college, said he looked to his mother’s peers—known as the Greatest Generation—and vowed that his generation would do better. “I would challenge America to become a better place for its children.”

“I wish I could stand before you today and say that my generation is leaving you a country that is better than the one we inherited from our parents. It’s not like we haven’t done any good,” he said. “But I am not worried about my promise to America’s children, because let me tell you what else my role models taught me: The best of America is yet to come.”

Now it is the 2013 graduates who must finish the work and fulfill the promises of those who came before, Canada said.

Interim President Carol Folt echoed these sentiments as she bid farewell to Dartmouth in her valedictory address. Folt recalled when the graduates gathered for the first time, “when then-President Jim Yong Kim challenged you to develop skills and courage to turn your good intentions into great outcomes.

”For four years, I have loved watching you take on that challenge. You have built an identity, you are a class that cares, you have strong voices, you seek truth, and you do not shy away from hard issues. You can have a profound impact in the world,“ she said.

The first woman to lead Dartmouth, Folt, whose three decades at the College include service as provost, dean of faculty, and dean of graduate studies, becomes the 11th chancellor of the University of North Carolina at Chapel Hill on July 1.

”Thank you for sharing your graduation with me. With my own move to UNC-Chapel Hill imminent, I feel as if I am graduating with you,“ Folt said.

Folt’s address came at the end of a three-hour ceremony that included the presentation of eight honorary degrees—including one that came as a surprise to Folt.

She was presented with the honorary degree Doctor of Humane Letters. In bestowing the honor, Board of Trustees Chair Steve Mandel ’78 said Folt showed “tremendous vision that will help shape Dartmouth’s future for years ahead.”

“You encouraged an entire community to think about the future, but you also understood how important it is that we pay tribute to our past,” Mandel said. “You set your sights high and inspired others to do the same, and helped identify strategic opportunities that will guide Dartmouth for decades to come.”

Maura Farley of Darien, Conn., recalled the words of Collis Cafe Manager Steve Edes after she complimented the food and service in the campus restaurant. ”Steve smiled and replied, ‘Well, we try to hold ourselves to the highest possible standard here.’“ Farley recalled. ”I think that Steve’s words are certainly worth remembering as we step outside of Dartmouth and rise to meet the new challenges that we will soon encounter.“

Joel Malkin of Scottsdale, Ariz., who was commissioned as a second lieutenant in the Marine Corps in a ceremony on Saturday, thanked those who had made the success of his class possible—the faculty, staff, and alumni of Dartmouth. He also thanked the graduates’ families.

”We are here because others enabled us. Graduates, there are plenty of ceremonies and rituals commemorating our success this weekend. So please join me now in taking time to thank those who equipped us and made our success a possibility,“ he said.

Josh Kornberg of Jericho, N.Y., called on his classmates to take an active role in ”self-discovery and self-creation.“

”What we do every day shapes who we become. I hope that we live consciously with love unto ourselves and others, so that we end up discovering, creating, and becoming the people we want to be, more fully ourselves,“ Kornberg said.

”He urged us to, in our four years at Dartmouth, remember the ‘Four P’s’: passion, persistence, pursuit of knowledge, and the planet,“ she said. ”Although President Kim is not here to see us graduate, each of our experiences has in unique ways been marked by these Four P’s.“

Anna Morenz of Tucson, Ariz., spoke about broadening her community beyond her socioeconomic background through a program called ”Telling My Story.“ Friends helped her see the importance of ”hearing stories from people in person, not over the Internet or in the newspaper or in statistics. I believe in change happening at that level—between two people talking and listening. Maybe it’s old-fashioned and simple, but it seems very, very real to me—a space for genuine empathy and enrichment of world views.“

Dartmouth awarded bachelors, masters, and doctoral degrees from its undergraduate and graduate Arts & Sciences programs, Geisel School of Medicine, Thayer School of Engineering, and the Tuck School of Business. The graduates received diplomas and greeted Folt with a hug or handshake.

At the request of Georgia Travers, president of the Class of 2013, a chair was left empty in the front row of the undergraduate seating section as a memorial for Crispin Scott ’13, who died in Spain in 2011 while studying abroad. The Class Council had purchased a bouquet of flowers that adorned the chair.

The Commencement ceremony capped a weekend of events that included a baccalaureate multifaith service for graduates and guests on Saturday, featuring an address by the Rev. V. Gene Robinson, retired bishop of the Episcopal Diocese of New Hampshire.

Abraham Verghese, professor and senior associate chair for theory and practice of medicine, Department of Medicine, Stanford University, spoke at Geisel; and mining and banking investor and alumnus Zdenĕk Bakala, Tuck ’89, spoke at Tuck, and Suresh spoke to engineering graduates at Thayer.

Members of the Class of 1963, celebrating their 50th reunion, were recognized by Folt during Commencement. Wearing green caps, the returning classmates led the procession to begin the ceremony, marching onto the Green to long, enthusiastic applause. See more coverage and news from Commencement 2013. 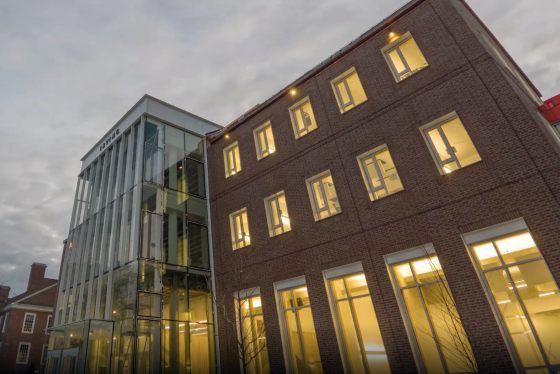