Then and Now: Big Green Women Make Their Mark

When the women in Dartmouth’s first coeducational class arrived in Hanover in September 1972, they joined women who were enrolled as transfer or exchange students as well as male students. Among the new students was Ann Fritz Hackett ’76, who became a pioneering student-athlete, joining the inaugural field hockey team that fall and the tennis team in the spring. 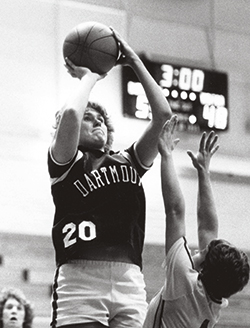 “In those early years, we had limited money so we were given the choice of uniforms or equipment,” says Fritz Hackett, president of the Horizon Consulting Group in McLean, Va., and a former member of Dartmouth’s Board of Trustees. “So we used the money for equipment. The field hockey team was the most motley looking crew. We all had to wear white tennis skirts, of course none of them matched, and any green T-shirt with the word Dartmouth on it. We may not have looked like much of a team, but we played with pride for Dartmouth, coach Aggie Bixler (now Kurtz), and each other, and we had such a good time.”

Kurtz, a former member of the U.S. national squash and lacrosse teams, was hired in 1972 to establish women’s athletics teams at Dartmouth. During the 1972-73 academic year, she started five teams: field hockey, squash, basketball, tennis, and lacrosse (a women’s ski team was also formed that year, but fell under the auspices of outdoor programs, not athletics.). In addition to her administrative duties, she coached three teams—field hockey, squash, and lacrosse.

“Women’s athletics wasn’t huge around the country then, and some of our players had never had a chance to be athletes before,” says Kurtz, who was appointed associate athletic director in 1974. “So we were teaching many of them how to play as well as coaching them, which was very satisfying. We had more teams here than at other schools in those early days, and I think that was because the Dartmouth women were very outgoing.” 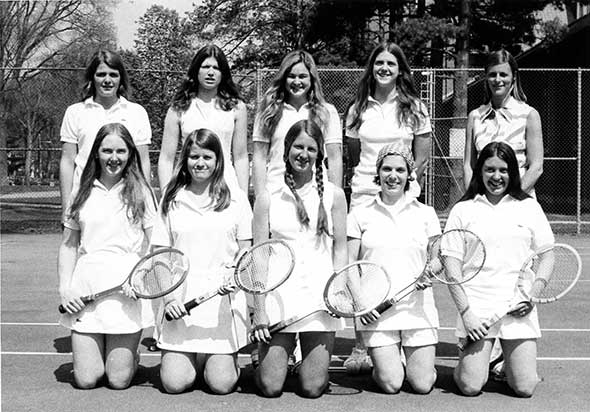 Ann Fritz Hackett ’76 (front row, far left) was a member of the 1973 women’s tennis team. “We played with pride for Dartmouth, coach Aggie Bixler (now Kurtz), and each other, and we had such a good time,” says Hackett. (Photo courtesy of Dartmouth Athletics)

By 1979, she had started women’s teams for swimming and diving, crew, cross country, track, ice hockey, and soccer. A legendary player and coach who has been inducted into the national lacrosse, squash, and intercollegiate squash halls of fame, Kurtz left her administrative post in 1979 to focus on coaching. “I finally got team travel and meal money by then, but it was always a real struggle,” says Kurtz, who coached field hockey until 1976, varsity lacrosse until 1981, junior varsity lacrosse until 1986, and varsity squash until 1989. “But for me it was a wonderful time. I was very lucky to be a part of this.”

Since the dawn of Dartmouth women’s sports in 1972, much has changed for both women’s and men’s athletics. Dartmouth now has 34 NCAA Division I varsity teams (16 sports each for men and women, plus co-ed equestrian and sailing teams), many of which regularly win Ivy League titles and are nationally competitive.

Dartmouth also has 33 club sports, which have largely replaced JV teams. The club sports range from the purely recreational to national championship teams such as  men’s rugby, figure skating, and fencing.