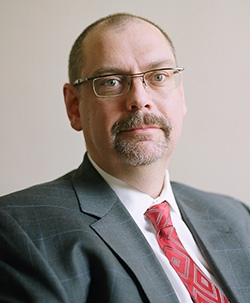 Richard G. Mills, Dartmouth’s new executive vice president and chief financial officer, comes to Hanover from Harvard Medical School, where he has been the executive dean for administration. He will assume his new role in mid-August. (Photo courtesy of Richard G. Mills)

He will report directly to President Philip J. Hanlon and will be a key member of the senior leadership team at Dartmouth. Mills will assume his new role in mid-August.

“Rick is an outstanding professional with the proven ability to exercise independent judgment and lead teams within complex environments,” says Hanlon. “I will rely on his insightful analysis and experienced counsel as Dartmouth strengthens its position as a leader during a time of great change in higher education.”

Over the last three years, Mills had administrative and financial responsibility for the operation of Harvard Medical School, an institution with more than 12,000 faculty appointments, a $625 million annual operating budget, and $55 million in annual capital spending. He led the administration’s restructuring efforts to reduce costs and improve service in a new and challenging funding environment. He was also responsible for the school’s execution of plans to build new sources of revenue.

“I am excited and honored that President Hanlon invited me to join his leadership team,” Mills says. “I was initially attracted by the opportunity to further advance the academic mission of a superb undergraduate college, three premier professional schools, and leading graduate programs. When I later met Phil and so many members of the remarkable community, I also realized what a true privilege it would be to join the Dartmouth family. I am looking forward to meeting more students, faculty, and staff in the coming months and learning what it means to bleed green!”

At Harvard, Mills simultaneously served on a number of boards, including the committee on risk management, the boards of Harvard University Library and Harvard Clinical Research Institute, and the underwriting subcommittee of the board for CRICO, the University’s captive malpractice insurance company, which insures most Harvard-affiliated practicing physicians. At the direction of Harvard President Drew Faust, Mills also served on committees related to a number of university planning initiatives in areas including energy, global strategy, and enterprise risk management.

Mills will work closely with Hanlon and the provost to formulate Dartmouth’s annual operating budget, currently more than $950 million. He will also work with deans, executive officers, faculty, and trustees to ensure that the institution fulfills its legal and financial obligations, and to safeguard the institution’s financial, human, physical, and information assets. He will have specific oversight of human resources, finance, facilities and operations, internal audit, and information technology.

Helble says, “Rick demonstrates a deep understanding of higher education and the importance of the interconnectedness of Dartmouth’s schools and divisions to advancing Dartmouth’s mission. His clear understanding of the complex needs of a diverse organization and his significant professional leadership and management experience make him an excellent choice.”

Before joining Harvard Medical School in 2005, Mills worked as a litigation attorney, a principal in strategic consulting, and senior staff counsel for the Massachusetts Water Resources Authority. He received a Bachelor of Arts in history from Hamilton College and a law degree from Boston University. He currently lives in Arlington, Mass., with his wife, Gretchen May, and their two daughters, Emily and Natalie, both of whom are in college. Rick and Gretchen will soon relocate to the Upper Valley.