One hundred and fifty years ago today, Maj. Gen. George Pickett and some 12,000 Confederate troops launched a massive assault on Union defenses near Gettysburg, Pa. Within hours, Pickett’s division was destroyed.

Pickett’s Charge, often known as the “high-water mark” of the Confederacy, would serve as the defining moment of the defining battle of the Civil War. 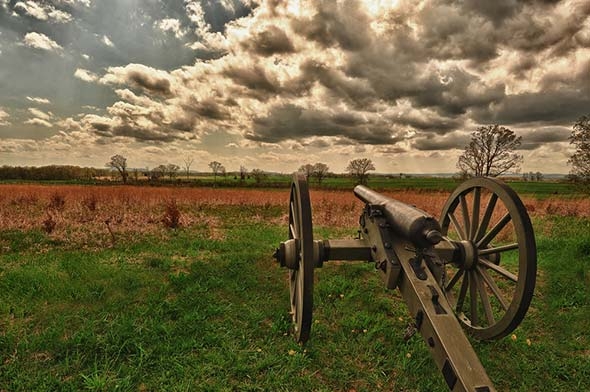 Union Lt. Frank Haskell, Dartmouth Class of 1854, who fought at the Battle of Gettysburg, later gave a thorough account of the battle in a letter to his brother. (Shutterstock image)

Among the Union troops that day was Lt. Frank Haskell, Dartmouth Class of 1854, who later give a thorough account of the battle in a letter to his brother. According to his letter, Haskell helped in the defense against the famous Confederate onslaught.

Before the Confederates began their attack, Haskell wrote, the Union soldiers seemed calm.

“The storm was near, and we all knew it well enough by this time, which [would] so rain death upon these crests and down their slopes, and yet the men who could not, and would not escape it, were as calm and cheerful, generally, as if nothing unusual were about to happen.”

The first part of the charge was essentially a march, as the Confederates walked hundreds of yards uphill in an open field, exposed to heavy artillery fire. Once they reached the Union defenses on Cemetery Ridge, the fighting was vicious.

“Men are dropping dead or wounded on all sides, by scores and by hundreds, poor mutilated creatures, some with an arm dangling, some with a leg broken by a bullet, are limping and crawling towards the rear,” wrote Haskell. “A sublime heroism seems to pervade all, and the intuition to lose that crest, all is lost. How our officers, in the work of cheering on and directing the men, are falling.”

While Haskell’s account—which was critical of some fellow Union soldiers—has been disputed, Dartmouth Professor of History Robert Bonner says the account serves an important purpose. To document the enormous battle, which involved 1 percent of the U.S. male population, was a huge undertaking, Bonner says.

“Frank Haskell’s account was important for being the first effort to put the ‘battles of Gettysburg’ in a narrative order.  This was an achievement, given the gargantuan dimensions of the conflicts over July 1 to 4,” says Bonner. “Haskell’s comments on particular commanders would be controversial (especially with those he criticized), but his insistence that a unified story of this clash could be told had a lasting power.”

A plaque at Rauner Special Collections Library notes that 73 Dartmouth alumni and students, including 63 Union and 10 Confederate soldiers, died during the Civil War.

The bravery of the Confederate soldiers at Gettysburg was not lost on Haskell, a native of Tunbridge, Vt.

“The enemy, too, showed a determination and valor worthy of a better cause. Their conduct in this battle even makes me proud of them as Americans.”

Haskell would not see the end of the war. He was killed leading a charge at Cold Harbor, Va., less than a year after the Battle of Gettysburg.