Read the full story by Kate Siber ’02, published by the Tuck School of Business.

Jim Weber, Tuck ’86, the CEO of Brooks Running Company, has decided to dress like Captain Kirk. Today is Friday, which means it’s group run day at Brooks’ headquarters, and the customer service department is hosting. They chose a theme—science fiction—and invited everyone. Weber pulls his yellow Star Trek shirt over his head, dons his black pants, and picks up his phaser before joining the group: fellow Star Trek characters, Darth Vader, and a handful of martians milling about, ready to run. 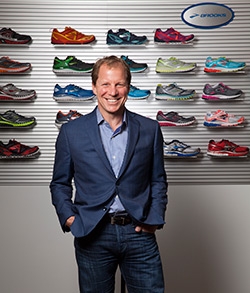 “I continue to have a lot of conviction that in business, oftentimes the riskiest thing you can do is look like your competitors,” says Jim Weber, Tuck ’86. (Photo by Hayley Young Photography)

Weber, who has run for more than 30 years, usually runs alone. He runs to move his legs and to let his mind wander. But today is a different day, and Weber is always game for something fun. The crowd of Trekkies and martians heads out the door onto a busy street and down two blocks to the Burke-Gilman Trail, a 30-mile ribbon of pavement that threads through greater Seattle. Then, they disperse in opposite directions on the running path for a half hour of company-encouraged fun and exercise.

Some of the faster employees run around the top of Lake Union and into the Fremont neighborhood, past the site where workers are busy constructing Brooks’ future home—a big, new, ultra-green office building. This is the part in the story when Weber will tell you how he wasn’t ever supposed to build a building.

“I started out as a banker, and the chief credit officer, this old curmudgeon, was teaching credit school to these young bankers and he said the one thing you have to watch out for is if your client ever builds a building,” says Weber. “Call the loan and run because they’ll invariably lose focus on their business. So I’ve never built a building, but our developer came to us and found this unique spot right on the Burke-Gilman Trail, looking across Lake Union at downtown Seattle.”

It is not just his willingness to wear a Star Trek costume or construct a building against conventional wisdom; Jim Weber does a lot of things other CEOs would not. But it might be precisely this willingness to take risks and follow his own internal compass that’s the key to his formidable success. For the last 12 years, Weber has steered the ship at Brooks Running Company, a Seattle-based company that makes performance running shoes as well as apparel and accessories. Since he took over in 2001, when Brooks was nearly bankrupt, the company has grown every year, with compound growth of 18 percent between 2000 and 2012. In 2013, sales are projected to near half a billion dollars.

Now, Brooks is the leading brand in the specialty run footwear market with 29 percent market share. It is an astounding accomplishment, and, just over the last couple of years, magazine features and television hosts have lauded the company for the seemingly overnight turnaround. A closer look, however, reveals that Brooks’ success is not a fluke or an overnight sensation. It’s the product of a long, steady march steered by a leader who thinks in the long term and who is not even close to done.