Former AmeriCares president and CEO Curt Welling ’71, Tuck ’77, has joined Dartmouth’s Tuck School of Business as a senior fellow in its Center for Global Business and Government and the Center for Business & Society. Welling assumed the joint appointments January 1, following his 11-year tenure at the nonprofit global health and disaster relief organization. 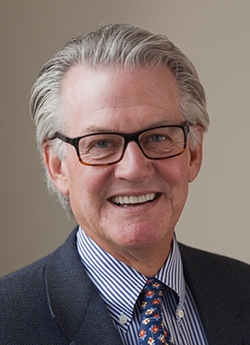 Curt Welling ’71, Tuck ’77, will work with Tuck MBA students and alumni interested in areas such as global health, disaster relief, humanitarian leadership, and nonprofit strategy and governance. (Photo courtesy of the Tuck School of Business)

“We are thrilled to welcome Curt Welling to Tuck,” said Matthew Slaughter, faculty director of the Center for Global Business and Government and associate dean of faculty at Tuck. “His many accomplishments, both at AmeriCares and earlier in his career in finance, have been broad and long-lasting. Our students will benefit greatly from his experience and insight into leading complex, global organizations.”

“Tuck has developed a preeminent position in preparing exceptional young leaders to address the world’s most pressing problems. Many of these problems exist at the intersection of business, government, and civil society. Stakeholders—including students—are demanding new models and new perspectives,” Welling said. “I am excited to join the exceptional team at Tuck in pursuing new approaches to these most important issues.”

AmeriCares is a nonprofit global health and emergency response organization that delivers medicines and medical supplies to people in crisis. As president and CEO, Welling oversaw the distribution of $9 billion in aid worldwide. Under his leadership, AmeriCares became the world’s leading organization for delivering donated medicines and medical supplies, and launched multi-year relief efforts for several major disasters including the Japan earthquake and tsunami, the Haiti earthquake, and the Southeast Asia tsunami.

Before joining AmeriCares in 2002, Welling spent 25 years in senior executive roles in the investment banking and securities industries, including president and CEO of SG Cowen Securities Corporation and senior managing director of global equity capital markets at Bear Stearns. He currently serves on the boards of both Coca-Cola Enterprises (NYSE/Euronext Paris: CCE) and Sapient Corporation (NASDAQ: SAPE). He also chairs the Board of Visitors of the Nelson A. Rockefeller Center for Public Policy at Dartmouth, and serves on the board of the Adirondack Council.

Welling was the founding board chair of the Donaldson Adoption Institute and board chair of Spence Chapin Services. He earned a bachelor of arts in English from Dartmouth, an MBA from Tuck, and a law degree from Vanderbilt University.