From the Start, Dartmouth Athletes Warmed to Winter Olympics

Dartmouth and the Winter Olympics have a long history, dating back to the first Olympic Winter Games, in Chamonix, France, in 1924. Rhodes Scholar John Carleton, Class of 1922, represented Dartmouth at those inaugural Winter Games, participating in “both the international jumping and cross country events,” according to a February 1936 article in Dartmouth Alumni Magazine.

Related: Read More About the Olympics On the Road to Sochi The Contenders 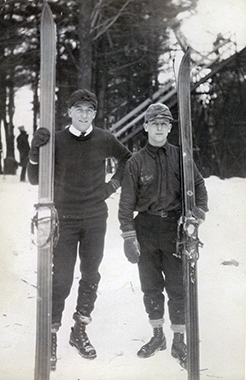 “Fortunately, Dartmouth’s senior leaders and trustees have recognized this great tradition of excellence as something that sets Dartmouth apart,” Nelson says. “It’s the College’s ongoing investment in the team itself, the Dartmouth Skiway, the Nordic training and competition trails at Oak Hill, and the various instructional and recreational ski programs that maintain Dartmouth’s position in producing more Winter Olympic athletes, and being more closely identified with the sport of skiing, than any other college or university in the country.

“Over the decades, the visibility of skiing at Dartmouth attracted students and coaches who engaged in the sport at the highest levels — and produced alumni and alumnae instrumental in promoting the sport around the country and the world,” says Nelson, noting that this has helped produce a ski program that has won the NCAA team championship three times. “It also doesn't hurt that the D-Plan allows nationally and internationally competitive skiers to race in the winter.”

Nelson says a great deal of credit for Dartmouth’s early Olympic participation goes to Fred H. Harris, Class of 1911, the founder of the Dartmouth Outing Club (DOC). The DOC was formed in 1909 to “stimulate interest in out-of-door winter sports,” and boasted more than 1,700 members by 1926. Carleton was one of Harris’ ski-jumping pupils on Vale of Tempe ski jump constructed by the DOC in 1922. (The site is now marked by a plaque on the Hanover Country Club golf course.)

“The Dartmouth Outing Club was founded at a time when the sport of skiing was poised to take off in the United States,” says Nelson. “Thanks to the vision and enthusiasm of Fred Harris '11 and other early DOC founders and members, skiing has been a central focus of the club from its origins until today.”

DOC members founded the first intercollegiate ski team at Dartmouth and introduced downhill (Alpine) skiing to the College community. Dartmouth Physics Professor Charles A. Proctor, Class of 1900, who is considered one of the country’s ski pioneers, also played a large role in the growth of skiing at Dartmouth. Proctor and a group of faculty and students first raced down Mount Moosilauke in 1914, dashing along a narrow carriage road that resembled a toboggan chute surrounded by thick woods. By 1933, this annual DOC tradition became the U.S. Downhill Championship. Proctor’s son, Charles N. “Charley” Proctor ’28, went on to compete in the ski jump and Nordic skiing events at the 1928 Winter Olympics in St. Moritz and was the second American-born skier (after John Carleton) to compete in a Winter Olympics.

At the 1932 Winter Olympics in Lake Placid, N.Y., all three Dartmouth representatives earned medals. Lake Placid native Jack Shea ’32 won gold in the 500-meter and 1,500-meter speed skating events and was chosen to take the Olympic oath on behalf of the entire U.S. team. Doug Everett ’26 won a silver medal in hockey, and Robert Minton ’26, a broker by day, earned a bronze serving as brakeman on the two-man bobsleigh team.

There have been many Dartmouth Winter Olympic highlights over the years, including the hockey silver medal won by Arnie Oss Jr. ’50, Cliff Harrison ’51, and Dick Desmond ’49 at the 1952 Games in Oslo; the silver medal performance in Alpine skiing by Chick Igaya ’57 at the 1956 Games in Cortina; and the bobsled gold medal captured by Canadian Peter Kirby ’54 at the 1964 Games in Innsbruck. Igaya, who represented Japan in three Olympics, remains the only Japanese skier ever to win an Olympic medal in skiing.

New Hampshire native Liz McIntyre ’87 was Dartmouth’s first female Winter Olympic medalist, winning a silver medal in freestyle moguls skiing at the 1994 Games in Lillehammer. McIntyre was followed by Sarah Tueting ’98 and Gretchen Ulion ’94, who won gold medals for the U.S. in 1998 at the inaugural women’s ice hockey event in Nagano. Also in hockey, Correne Bredin ’02 and Cherie Piper ’06 won gold for Canada at Salt Lake City in 2002, and Piper claimed gold at Torino in 2006 along with Katie Weatherston ’06 and Gillian Apps ’06. Piper and Apps captured gold again for Canada at the 2010 Vancouver Games, where the Big Green also boasted Super-G bronze medalist Andrew Weibrecht ’09. Before matriculating at Dartmouth, Hannah Kearney ’15 won the gold medal in moguls in Vancouver.

Also of note, Tim Caldwell ’76 (Nordic skiing), Nina Kemppel ’92 (Nordic skiing), and Cameron “Cammy” Myler ’92 (luge) have participated in four Winter Games, more than any other alumni, and Myler is the only Ivy Leaguer to carry the U.S. flag during opening ceremonies, which she did in 1994 at Lillehammer. Sarah Konrad ’89 is the only American woman to compete in two events in the same Winter Games, participating in biathlon and Nordic skiing at Torino in 2006. At age 38, the former competitive cyclist with a PhD in geology, was also the oldest female Olympian in Torino.