Hanover, with its well-defined Main Street abutting a spacious quad and ivy-covered buildings, has everything you’d expect in a college town: restaurants, bars, coffee shops, pizza joints, bookstores. There’s just one thing missing: a food truck. These rolling fast-food businesses, often serving fresh salads and sandwiches made with locally sourced ingredients, have become increasingly popular over the past four years, especially where hungry, cash-strapped students congregate. According to the National Restaurant Association, food trucks generated $650 million in revenue in 2012, accounting for 1 percent of U.S. restaurant sales. Emergent Research, a small-business consulting firm, expects those revenues to triple or quadruple by 2017 as trucks tap into the growing demand for food that’s quick, fresh, and casual. 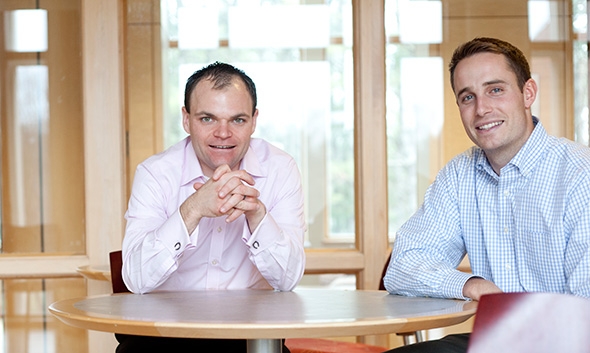 The Box was founded by Eric Winn, Tuck ’14, left, and Mike Parshley, Tuck ’14. The two teamed up during their first two weeks at Tuck and have been working on the food truck idea ever since. (Photo by Laura DeCapua)

The absence of a food truck at Dartmouth struck Eric Winn ’04, Tuck ’14, and Mike Parshley, Tuck ’14, as an opportunity to both start a business and leave a legacy on campus. The men teamed up during their first two weeks at Tuck and have been working on the truck idea ever since. A few months later, Shiro Yagaki, Tuck ’14, joined the team. They expect to open the window on The Box, a student-run business serving lunch, dinner, and late-night fare at various locations on campus, on March 24, the first day of classes after Tuck’s spring break.

“We wanted to get real business experience and yet do something that’s interesting,” said Parshley, who came to Tuck after a business analyst job at Fidelity Investments. “We didn’t feel there was enough delicious dining nearby, and eventually we saw that feeling was shared among the community.”

Winn and Parshley launched a Kickstarter campaign in February to help raise funds for The Box, and in early March the team met its fundraising goal. The Box’s Kickstarter website features the preliminary menu, which is “inspired by the delicious cuisine of the Mediterranean,” and also explains the role undergraduates will play in the project: “At The BOX, our core philosophy is to provide real-world management experience for Dartmouth undergraduates. Each year, a team of Tuck students will manage all aspects of the business, from finance and administration to operations and marketing. They will work closely with The BOX’s undergraduate team, who will not only staff the truck but also have the opportunity to help run the business.”