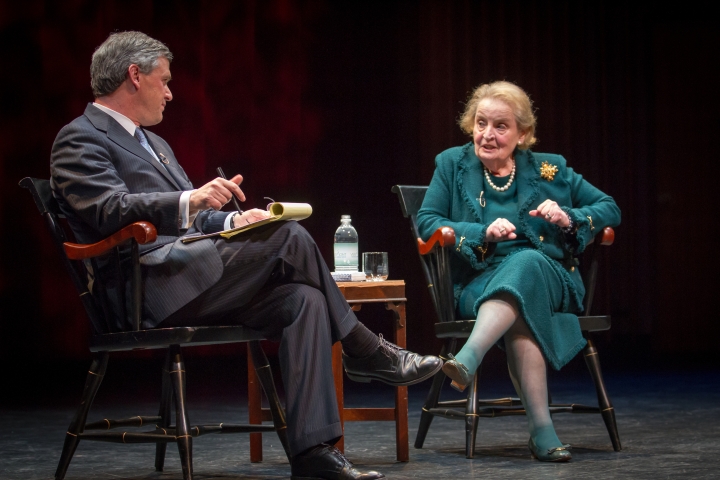 Telling tales from her diplomatic career, former U.S. Secretary of State Madeleine Albright yesterday enthralled and entertained Dartmouth students and later a capacity crowd of 900 in Spaulding Auditorium. The first female Secretary of State, Albright served in President Bill Clinton’s administration from 1997 to 2001. She shared her thoughts on crises ranging from the Ukraine to Syria, and gave insights into her personal diplomatic tactics, which included sending signals to foreign leaders with her jewelry.

“At Georgetown, I teach a course, and I say foreign policy is just trying to get someone to do what you want. That’s the bottom line,” Albright told Daniel Benjamin, the Norman E. McCulloch Jr. Director of the John Sloan Dickey Center for International Understanding, who led a conversation with Albright on the Spaulding Auditorium stage in the Hopkins Center for the Arts. Albright’s visit to Dartmouth was sponsored by the Dickey Center.

Albright touched on many of the same topics and themes in her public conversation and during the classroom session she held earlier in the day with international studies minors, War and Peace Fellows, and Great Issues Scholars. She also met with the Dickey Center’s International Security and U.S. Foreign Policy Fellows. She expressed her fear that the current crisis in Ukraine presents a “game changer” in Russia’s relationship with the U.S. and Europe, and said Russian President Vladimir Putin has created “his own version of history; he makes up facts.”

Joking with students that she might be accused of “psycho-babble,” Albright pointed to the blows that Russia’s national identity has suffered as a result of no longer being part of one of the world’s foremost superpowers, the former Soviet Union. As one Russian man described the country to her during a 1991 focus group, “now we are just Bangladesh with missiles.”

“Psychologically, Russia has lost its identity,” Albright said during her Spaulding talk. “And Putin has bought into that and he’s trying to present a larger, nationalist Russia that can have pride in its history. And I think they need to have pride in their history, but it doesn’t mean they have to dismember Ukraine.”

Putin also figured in one of Albright’s stories about her jewelry, which she spoke about at Benjamin’s prompting. Albright wrote about her diplomatic use of jewelry in her 2009 book, Read My Pins: Stories from a Diplomat’s Jewel Box. She told the crowd that the gold pin she was wearing at Dartmouth was called “America,” and was given to her by Gen. John Shalikashvili, former chairman of the Joint Chiefs of Staff. “Pins have gotten me into trouble and they’ve gotten me out of trouble,” she said, laughing.

Albright began wearing the pins when she served as U.S. Ambassador to the United Nations. After being compared to a serpent by Iraqi newspapers, she wore a snake pin whenever she knew she’d be speaking publicly about Saddam Hussein or Iraq. When she attended a 2000 summit in Russia with President Clinton, she wore a three-monkey pin that represented the “See No Evil, Hear No Evil, Speak No Evil” monkeys. Putin asked Clinton about the significance of Albright’s pin, and Albright responded, “’Because I think your Chechnyan policy is evil.’ President Clinton looked at me like, ‘Have you lost your mind? You’re our top diplomat and you’ve just screwed up the summit.’” 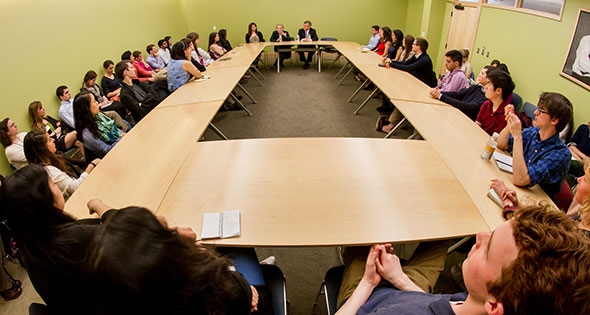 Former Secretary of State Madeleine Albright, seated next to Daniel Benjamin of the Dickey Center, meets with students before Albright’s lecture. (Photo by Lars Blackmore)

Albright shared with both students and the audience in Spaulding that she is a proud Dartmouth mother and that her daughter Anne Korbel Albright ’83 played goalie on the Big Green women’s hockey. Albright, who in 2001 received an honorary degree from Dartmouth and delivered the College’s Commencement address, was also quick to point out that she was properly attired in a green suit for her Dartmouth visit. But only the student audience learned that former Secretary of State Condoleezza Rice was a favorite student of Albright’s father, Josef Korbel, when Rice studied political science with him at the University of Denver.

Albright also shared with the students some behind-the-scenes stories of President Clinton’s 2000 Camp David Summit, in which she had hoped Israeli Prime Minister Ehud Barak’s dour mood could be improved by finding a piano for him to play.

“We knew that when Barak was in a bad mood, he liked to play the piano,” Albright said. But Barak, who had insisted that no one could leave Camp David during the summit except President Clinton, said he didn’t want a piano; he wanted to visit Gettysburg. So while Barak was visiting the Civil War site, Palestinian leader Yasser Arafat went with Albright to her nearby farm and played and hung out at the pool with her 2-year-old grandson, her daughter, and her daughter’s friends. “So this is diplomacy,” Albright joked with the students.

When asked by Benjamin for her thoughts on the Middle East, Albright said, “I’m an optimist who worries about it.”

Benjamin then reminded Albright of a comment former Czech President Václav Havel made to her following a speech she gave in Prague, in which Havel said no Czech diplomat or statesman could have given such a speech because it was too optimistic. Albright told Benjamin, “Why wouldn’t I be an optimist? I mean, I grew up in Czechoslovakia, I came to the United States, I got to be an American citizen, and I ended up as Secretary of State. Not so bad.” 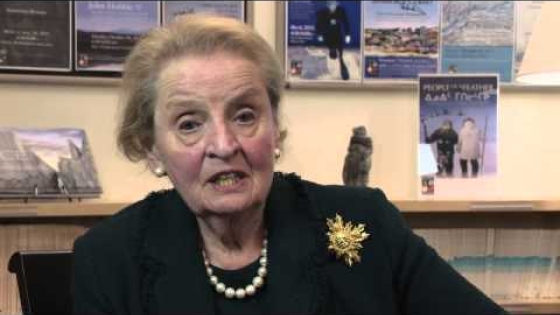