Former Secretary of State Madeleine Albright, who in 2001 received an honorary degree from Dartmouth and delivered the College’s Commencement address, will return to campus next week for a public talk and meetings with Dartmouth students and faculty. 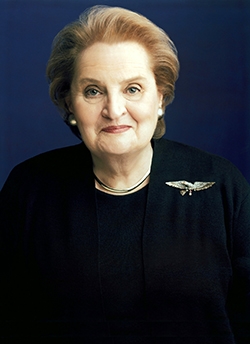 The talk, “Madeleine Albright in Conversation,” is sponsored by the John Sloan Dickey Center for International Understanding and will be held at 4:30 p.m. on April 8 in Spaulding Auditorium in the Hopkins Center for the Arts. Daniel Benjamin, the Norman E. McCulloch Jr. Director of the Dickey Center, will conduct the conversation with Albright.

During her 90-minute talk, Albright will discuss her service as Secretary of State and U.S. Ambassador to the United Nations and provide insights into such issues as the crisis in Ukraine, the Arab Spring, and transatlantic relations. She will also address her work around the world as a lifelong champion of democracy promotion, and the challenge of balancing life and work in the high-pressure arena of politics and policy. A question-and-answer period will follow the talk, which is free and open to the public. Tickets are not required, but seating will be on a first-come, first-seated basis.

While at Dartmouth, Albright will have lunch with several faculty members and hold a discussion session with undergraduates, including international studies minors, War and Peace Fellows, and Great Issues Scholars. She will also meet with the Dickey Center’s International Security and U.S. Foreign Policy Fellows.

Albright was named the first female Secretary of State in 1997; at the time she was the highest-ranking woman in the history of the U.S. government. From 1993 to 1997, she served as the U.S. Permanent Representative to the United Nations and was a member of President Clinton’s Cabinet.

When Dartmouth awarded her an honorary degree, the citation noted, “The post-Cold War decade has seen a shifting of the principles of international relations and an engagement with issues of globalism. You have been in the center of this process. From Kosovo to Pyongyang, from NATO to the Middle East, you have worked to articulate and to affirm an American interest that is more than a self-interest.”

A graduate of Wellesley College and recipient of a PhD from Columbia University, Albright leads the international strategy-consulting firm Albright Stonebridge Group. She is also a professor in the practice of diplomacy at the Georgetown University School of Foreign Service. Albright has authored or co-authored several books, including the New York Times bestseller Madam Secretary: A Memoir and Prague Winter: A Personal Story of Remembrance and War, 1937-1948, published in 2013.

Albright chairs the National Democratic Institute for International Affairs and the Pew Global Attitudes Project, and serves as president of the Truman Scholarship Foundation and on the U.S. Department of Defense’s Defense Policy Board.